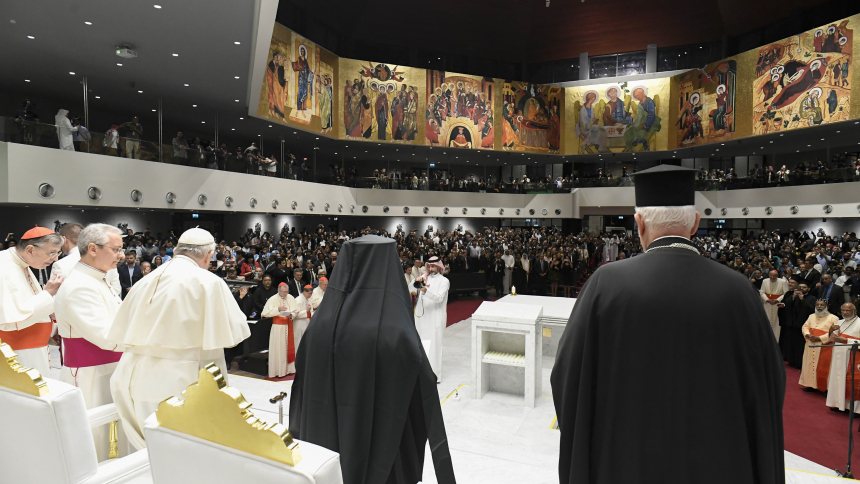 AWALI, Bahrain (CNS) -- Conflicts and evil in the world are all rooted in people rejecting God and their brothers and sisters, Pope Francis said to international Islamic scholars and experts.

"Dear friends, brothers in Abraham and believers in the one God: Social, international, economic and individual evils, as well as the dramatic environmental crisis of our time on which we have reflected here today, ultimately derive from estrangement from God and our neighbor," he said Nov. 4 during at meeting with members of the Muslim Council of Elders.

"Ours, then, is a unique and inescapable duty: to help humanity to rediscover the forgotten sources of life, to lead men and women to drink from the wellsprings of ancient wisdom, and to bring the faithful closer to worship of the God of heaven and closer to our brothers and sisters for whom he created the earth," the pope said.

A few dozen imams, scholars, leaders and representatives of the Vatican gathered in a courtyard at the mosque of the Sakhir Palace for the meeting, which began with a Muslim boy reciting a few verses from the Quran, followed by a Christian girl reading from the Book of Genesis.

Sheikh Ahmad el-Tayeb, grand imam of Egypt's Al-Azhar mosque and university and chairman of the Muslim Council of Elders, was among the speakers. He said interfaith dialogue is key to confronting today's crises, "especially the vast chasm between rich and poor and its continuing expansion, and this accompanying imbalance of man and nature."

"Our world today no longer has a referenced authority to guide it whenever it strays or confuses truth with lies, goodness with evil, the commendable with the detestable," the sheikh said.

Mohamed Abdelsalam, secretary-general of the Muslim Council of Elders, said the grand imam and the pope provide "a constant source of inspiration" for religious leaders and millions of people of faith.

"They are a source of hope for advocates of peace and goodness, uplifting and motivating them in the pursuit of their work for humanity, its future and our aspirations for a more beautiful tomorrow and a better future," he said.

Pope Francis encouraged those working to avoid divisions and conflicts in Muslim communities, to promote mutual respect, tolerance and moderation, and to dispel "erroneous interpretations that, through violence, misconstrue, exploit and do a disservice to religious belief." Extremism is "a danger that corrodes genuine religion."

He thanked those "who strive to provide young people with a moral and intellectual education that opposes all forms of hatred and intolerance."

"The God of peace never brings about war, never incites hatred, never supports violence," he said. Peace is built with "encounter, patient negotiations and dialogue," and it is based on justice.

Prayer and fraternity "are our weapons," Pope Francis said, warning against putting one's trust in power, violence, war and the arms trade, "the 'commerce of death' that, through ever-increasing outlays, is turning our common home into one great arsenal."

According to the Stockholm International Peace Research Institute, the region with the largest spike in arms imports has been the Middle East, importing 25% more major arms in 2016-2020 than in 2011-2015. Saudi Arabia is the world's largest arms importer, the 2021 SIPRI report said.

Pope Francis told the Muslim Council of Elders that "while the world pursues the illusions of strength, power and money, we are called to proclaim, with the wisdom of our elders and fathers, that God and neighbor come before all else, that transcendence and fraternity alone will save us."

"We must be exemplary models of what we preach," he said, and help humanity understand what really matters.

Earlier in the day, at the Bahrain Forum for Dialogue: East and West for Human Coexistence, Sheikh el-Tayeb told participants that "the majority of the fears" people in the East have about the West "are equally shared by distinguished, elite Western thinkers, rulers and prominent leaders."

"Some realize that Western policy has become ineffective in dealing with international crises. This is because displays of military might are a threat to genuine politics," he said. The sheikh has called for "replacing politics with culture" in international relations, because culture "has the capacity for human understanding, encompassing its different aspects, whether physical, spiritual, intellectual or emotional."

Pope Francis' final stop Nov. 4 was an ecumenical meeting and a prayer for peace at the new Our Lady of Arabia Cathedral, the largest cathedral in the Persian Gulf region.

Bahrain is home to an estimated 90,000 Catholics who hail mainly from the Philippines, India and Sri Lanka. South Americans, Europeans and Arabs from the Levant region account for the rest of the country's Christian population.

Many local Christians and Catholics were in attendance as well Bahrain's King Hamad bin Isa Al Khalifa, Ecumenical Patriarch Bartholomew of Constantinople and other dignitaries.

The pope said in his speech that the Christian journey of communion must be marked by "unity in diversity and witness of life."

"Dear friends, let us ask ourselves how we are advancing on this journey," he said, asking whether they see ecumenism as a burden "or as the heartfelt desire of Jesus that all be 'one'?"

"What do I do for those brothers and sisters who believe in Christ and are not 'mine'? Do I get to know them, do I seek them out," he asked, or "Do I keep my distance and stand on formality?"

Christian witness is sharing a message, not of words, but with deeds, by loving and serving others, the pope said.

"Now that we are praying together for peace, are we truly people of peace? Do we desire to make the meekness of Jesus present everywhere, asking nothing in return?" the pope asked.

"We cannot truly witness to the God of love unless we are united among ourselves in accordance with his will," he said.

King Al Khalifa donated the land for the new cathedral, which was built in response to the Gulf region's increasing Catholic population, now estimated at 2.5 million. The cathedral seats 2,300 worshippers and serves the Apostolic Vicariate of Northern Arabia, which includes Bahrain, Kuwait, Qatar and, formally, Saudi Arabia.

Father Saji Thomas, cathedral project leader and parish priest, told reporters in December that the cathedral was "a model of religious harmony, a sign of the tolerance of the kingdom of Bahrain and a great example of peaceful coexistence to the world."