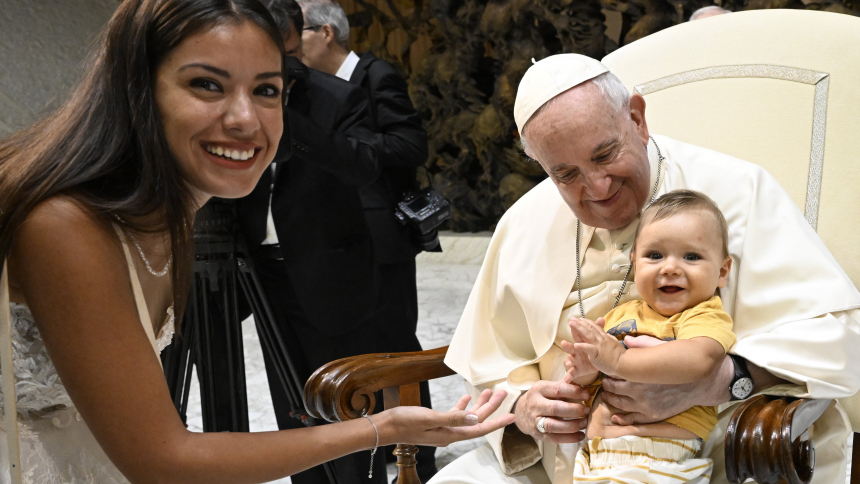 VATICAN CITY (CNS) -- God created every human being to be free to choose how to live in this world, Pope Francis said.

And those choices "will have a consequence, for you, for others and for the world; you can make the earth a magnificent garden or you can make it a desert of death," he said.

God is always there to help guide people in making the right choice, and this requires discernment, that is, a special "reflection of the mind, of the heart, that we have to do before making a decision," the pope said.

The pope made his remarks during his weekly general audience in the Vatican's Paul VI audience hall Aug. 31. He began a new series of talks on discernment after wrapping up a lengthy series on old age.

The topic of discernment is essential, he said, because everyone is faced with having to make decisions in life.

"According to the Bible, we do not find, set before us pre-packaged, the life we are to live. No! We have to decide it all the time," according to whatever situation comes one's way, he said.

"God invites us to evaluate and choose; he created us free and wants us to exercise our freedom," Pope Francis said. God is always by one's side and "he is always willing to advise us, to encourage us, to welcome us."

But God never imposes his will, the pope said. "Why? Because he wants to be loved and not feared. And also, God wants children, not slaves: free children. And love can only be lived in freedom."

Pope Francis said God gives humanity this precise instruction: "If you want to live, if you want to enjoy life, remember that you are a creature, that you are not the criterion of good and evil, and that the choices you make will have a consequence."

"The Lord gives the mission, you have to do this and that; and every person, the step he or she takes, must discern which decision to make," he added.

"Discernment is demanding but indispensable for living. It requires that I know myself, that I know what is good for me here and now. Above all, it requires a filial relationship with God" who will guide people, he said.

It takes intelligence, skill and the will to make a good choice, he said. Sometimes sacrifice is required for this discernment to become effective.

When discernment points to a decision that is "good" and "correct, there is an encounter between God's will and our will," he said, and this gives rise to "a very special joy."

"It is the joy of those who have found the Lord," he said. "Perhaps along the way you have to suffer a bit of uncertainty, thinking, seeking, but in the end the right decision blesses you with joy."

"To learn to live one must learn to love, and for this it is necessary to discern" and choose what would be "a sign of greater love, of greater maturity in love," he said.

When greeting visitors at the end of the main audience talk, the pope greeted people from Poland, recalling how Sept. 1 was the anniversary of the start of World War II, "which marked the Polish nation so painfully." Germany's invasion of Poland in 1939 led Great Britain and France to declare war on Germany.

"And today we are living the Third" World War, he said.

"May the memory of past experiences urge you to cultivate peace in yourselves, in your families, in social and international life," he said, asking people pray "in a special way for the Ukrainian people."

The pope also noted that the World Day of Prayer for the Care of Creation would be celebrated Sept. 1 and would launch "the Season of Creation," which ends Oct. 4, the feast of St. Francis of Assisi.

"May this year's theme, 'Listen to the Voice of Creation,' foster in everyone a concrete commitment to care for our common home," he said.

"At the mercy of our consumerist excesses, our sister Mother Earth groans and begs us to stop our abuse and her destruction," he said.

The pope referred specifically to the upcoming U.N. Climate Change Conference in Sharm el-Sheikh, Egypt, Nov. 7-18, and the Conference of the Parties to the U.N. Convention on Biological Diversity in Montreal in December.