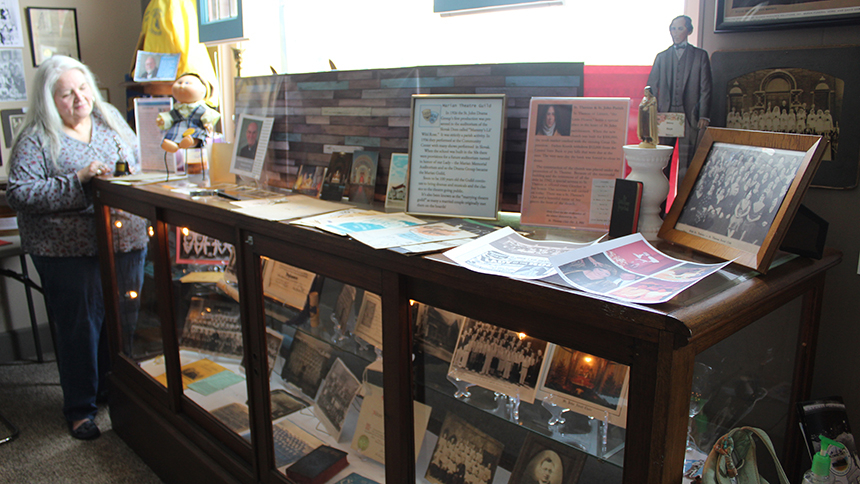 “St. John the Baptist Church is not simply the steeple you can see from almost anywhere in the immediate vicinity. It can be the center for your life if you allow it to be.”

WHITING – There’s plenty to be said for a stroll through downtown Whiting on a summer afternoon, not the least of which is a stop at the Whiting Historical Museum,1610 119th St., which features through this month – and maybe longer – an exhibit titled “A Tale of Two Churches.”

The focus is on the history of the community’s two “youngest” Catholic parishes, St. John the Baptist, established 125 years ago in 1897, and St. Adalbert, founded five years later in 1902. With both celebrating milestone anniversaries this year, it is an ideal time to look back at the history of these religious landmarks.

“I was surprised at how ethnic-based the neighborhoods, and hence the parishes, were in Whiting and some other communities,” said museum curator Gayle Kosalko, who developed the exhibit with museum librarian Rebecca Haynes, a dedicated volunteer. “St. Adalbert was the Polish parish, and we have a school workbook from as recently as the late 1940’s that was taught in Polish, while St. John the Baptist and Immaculate Conception (now closed) were Slovak, but St. John the Baptist was more open to ‘Americanization,’ Kosalko noted. “I’m from Hessville (a Hammond neighborhood), and we have no history of that kind of delineation.”

The exhibit features many photos that identify everyone from pastors – Father Walter Pawlicki (1950-55) is well-represented for having supervised the construction of the current church building dedicated in 1952 – to school classes to athletic teams, as well as parish events and milestones.

Separate display cases feature artifacts from each parish and school, including prayer books, school diplomas and report cards, figurines, church bulletins and programs. The Marian Theater Guild, founded in 1928 and recently back in business as a community theater troupe after a two-year pandemic hiatus, began as a church-sponsored group known as the St. John Drama Club and early programs detail the cast of “The Mikado” and “H.M.S. Pinafore.”

“St. John the Baptist, dedicated on July 4, 1897, “was the biggest church and school in the City of Whiting,” said Kosalko, who pointed out a framed array of photos of four SJB pastors. “There was the original church building, which was expanded in 1914, and the current church started in 1930, during The Great Depression. It had been planned for some time, and when the depression struck, the people started praying to St. Therese the Little Flower, and with a lot of sacrifices, the new building was dedicated in 1931.”

One prized possession unearthed by Kosalko’s husband, Chuck Kosalko, during a search of SJB storage rooms is an orange-and-black poster, in near-mint condition, publicizing a Cobra Productions concert in the St. John Panel Room by The Jackson Five at 7 p.m. Friday, Feb. 28, 1969 – just months before the singing brothers became a worldwide sensation with the release of their first Motown album, 'Diana Ross Presents The Jackson 5.” Aimed at youth “ages 13-18,” according to the poster, admission was $2.

“That was quite a find,” stated Kosalko, whose husband also contributed an idea that added a bit of whimsy to the exhibit. Looking out over the displays is a mannequin wearing a nun’s habit – actually a costume from a production of “The Sound of Music.”

“Students at both schools were once taught by nuns, of course, the Sisters of Providence at SJB and the Sisters of the Holy Family of Nazareth at St. Adalbert,” said Kosalko, who added that it took about three weeks of eight-hour days to collect, inventory and set up the exhibit, which opened April 24 and will continue through at least June 26, the day after the 125th anniversary celebration at nearby St. John the Baptist. Museum hours are noon to 4 p.m. Sundays.

(The 125th anniversary celebration at St. John the Baptist begins with 4:30 p.m. Mass celebrated by Bishop Robert J. McClory, followed by a ticketed, catered Anniversary Cook-out and Dance on Lincoln Avenue with music by Dick Diamond and the Dusters, a cash bar, and a special surprise at 9:30 p.m. Tickets are available at the rectory through Saturday, June 4.)

Pat Dudzik Zygowicz, whose grandfather helped establish St. Adalbert, provided her 1949 First Holy Communion veil, prayer book and portrait, as well as the Polish school workbook, displayed near a framed collection of medals and ribbons that attest to the many contributions of Anthony Guzek. “He was on every committee at St. Adalbert, it seems,” said Kosalko. “He was the founder of the St. Adalbert Choir, which was big in the Polish community, not just the parish, and the Holy Name Society baseball program.”

One of the most unique items from St. Adalbert’s history is a “Devil’s stick” made by the father of the late Joanne Dudzek Jancosek early in the 20th century. Fashioned with cymbals and a set of jingle bells on top, the colorful wooden staff had a tambourine attached near the bottom. “It was carried up front in religious processions and pounded on the ground to create noise and scare away the Devil,” Kosalko explained.

Some of the most endearing mementos are printed quotes from parishioners detailing their memories from years gone by. Scattered among the artifacts, they recall the experiences of a First Communicant, a school patrol boy, a student watching The Bozo Show after walking home from school for lunch, and a proud parishioner watching a new church being built. “The memories of the people are so touching; they make the exhibit come alive,” said Kosalko.