Helping Each Student Shine is a Spiritual Work of Mercy, Pope Says 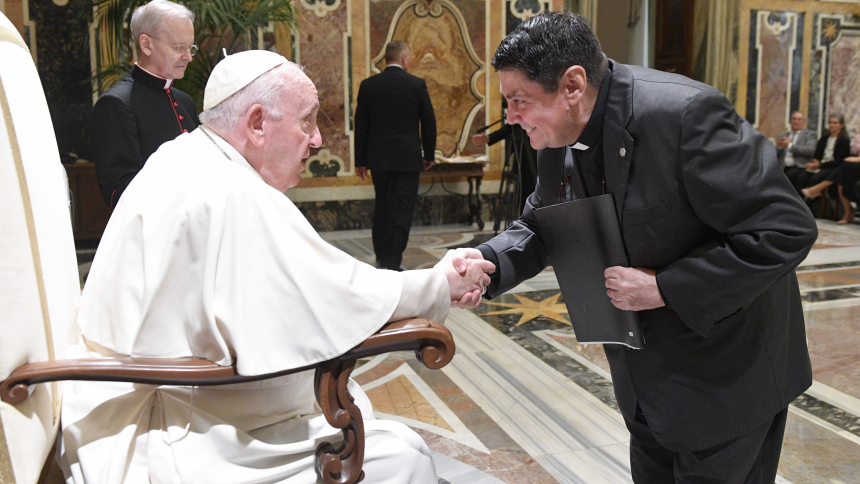 VATICAN CITY (CNS) - Education is a spiritual work of mercy not because it imparts information, but because it helps another find meaning and learn to shine, Pope Francis told members of a Catholic group from Argentina.

When done with respect, "education offers a meaning, a narrative to every element of human life," and it "helps to bring out the best in each person, to polish the diamond that the Lord has placed in each one," Pope Francis said Sept. 30 in a written message to members of the Fraternity of St. Thomas Aquinas Groups.

Founded in the 1960s in Argentina, the groups are committed to strengthening Christian values in society and in different cultures, mainly through the educational work of their members and, more recently, through the schools and universities they sponsor or staff.

Meeting members at the Vatican, Pope Francis distributed, but did not read his prepared text.

Christian education, the pope wrote, "helps this diamond to let the light, which is Christ, pass through it, so that in this way it can become a source of light and shine in the world."

"The Lord makes us sharers in his light, in his very nature, and therefore each of his disciples illuminates the world, driving away the darkness and transforming reality," he wrote.

Meeting the group less than two weeks before the Catholic Church will celebrate the 60th anniversary of the opening of the Second Vatican Council, Pope Francis wrote that the council highlighted "the rights and duties of the laity for the evangelizing mission that they, too, possess, since they are sons and daughters of God through baptism."

"The lay faithful have the important responsibility of bringing the light of the Gospel to the temporal realities of the world in communion with the pastors of the church and motivated by Christian charity," the pope wrote. One way of doing that is through education and by engaging in a dialogue with culture.

Pope Francis encouraged members of the fraternity to look to the example of St. Thomas Aquinas, who was not afraid to engage with the work of Aristotle, a pagan, but always grounded his intellectual activity in prayer, especially adoration of the Eucharist.

In St. Thomas' day, the pope wrote, "some were reluctant" to study Aristotle "because they feared that his pagan thought was in opposition to the Christian faith. However, St. Thomas discovered that much of Aristotle's works were in harmony with Christian revelation" and that "there is a natural harmony between faith and reason."

Recognizing that harmony, he said, "is essential for overcoming fundamentalism, fanaticism and ideology," and it opens a broad pathway "for bringing the message of the Good News to different cultures, always with proposals that are compatible with human intelligence and respectful of the identity of each people."