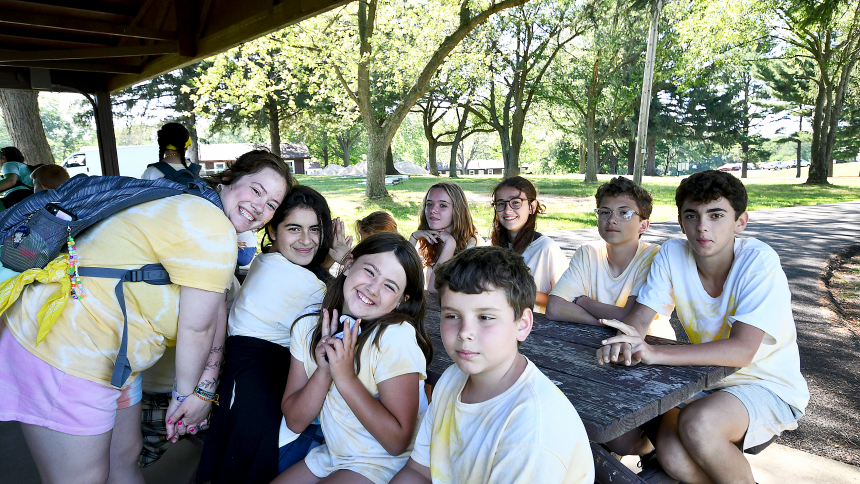 PORTER COUNTY – Spirits were high among first-time and returning campers, counselors and other staff members who found the third attempt to celebrate the 60th season of the diocesan Catholic Youth Organization Summer Camp to be the charm.

Eighty campers and more than two dozen staffers participated in Spirit Week, one of the summer season’s five themed sessions, at the 144-acre Camp Lawrence Retreat and Youth Center near Valparaiso.

Consultation among diocesan leadership resulted in the opening of a renovated camp on schedule, albeit with some pandemic protocols in place, including a capacity that will have spanned from 50% to 75% by the end of the June 20 to July 31 camp run.

“There are 25 staff members and 20 are newbies this season,” CYO summer camp co-director Matt Williams, known as Snooze to campers, said. “Having two years off, people got older, and many have found other jobs.”

Though there are many new faces, co-director Rosie Scannell, a.k.a. Chimp, said a certain familiar energy exists that makes “it feel like we never left.”

“Our staff has the best energy – they are all previous campers who fell in love with the place and came back to work here,” Scannell said. “They share that energy, and the campers pick up on that.”

Cheer-offs, camp trivia and scavenger hunts were among the competitive activities that culminated in Color Wars, where red, blue, green and yellow attire set apart groups, each seeking to gain points and the title as the camp’s top team.

Since 1959, the property featuring lily pad-dotted lakes, sunny meadows, and retreat houses has hosted more than 40,000 campers from Alaska to Texas. The year 2019 marked the first deviation from that history, when Camp Lawrence was closed for critical infrastructure upgrades.

Looking ahead to 2020, staffers had every reason to believe that the CYO-sponsored program would welcome back youths for a banner camp season. But the world of overnight camps was turned upside down, just like many other facets of society, due to the arrival of the coronavirus pandemic in the early weeks of that year.

CYO executive director John Curtin was on hand during Color Wars activities on July 1. He applauded the actions of Williams and Scannell, who developed an interactive online camp experience in 2020, when the in-person camp season was cancelled.

But that doesn’t compare to the great outdoors. “The activities are great and it’s so much fun watching these kids having fun … I never knew how important this was,” Curtin said.

Aquatics director Zach Belcaster, who started as a camper in 2012,, came to the 60th Camp Lawrence season with three years of counseling experience.

Belaster, or “Rafiki,” said he loves the campers and is keen on helping the ministry succeed. The long summer days are not really work for him, “I’m always enjoying myself here,” he said donning a full-body fabric squid costume.

Known to campers as Tidbit, Camryn Zapinski, 21, said coming to camp is about the people and not so much the place. Both her parents attended camp in the mid-1980s, and she began attending when she was 7.

Eighteen-year-old Simon Culp, whose counselor’s name is Subway, was disappointed that camp was cancelled for two years, but he went about enjoying his summers.

“Even coming back this year, I was a little ‘iffy’ about it, but I decided to come back,” Culp said. “Literally within two days of being here, I was thinking I have to come back next year and the year after that.”

Culp explained that the fun of being a participant turns into the maturity of wanting to better the lives of young people. “We can all come together and help these kids have a good week in the summer, especially those who are Carmelite Home (residents), who may not be able to get out much.”

At the renovated cafeteria, where teams drummed on dining tables and attempted to create the loudest cheers, youths reflected on their experiences for the week before joining the queue to receive a pasta lunch, served by volunteers such as Debbie Pishkur.

“I was a little bit shocked because I thought (the grounds) would be bigger or smaller but not in-between like it is,” said 11-year-old Henry Hughes. “It's a great camp with great food, amazing sports along with amazing activities in nature.”

Marking the lines of a cross in the air during his homily, the bishop said, "The beauty of the cross and how we are to respond to it is to love God with all that we have. And if we do that with all the kinds of love that we have for each other ... it's just a fantastic way to live."

Hughes, who attended Spirit Week with two of his siblings, reflected on the faith component woven through the camp experience, “I think it’s great to come to a Catholic camp like this,” he said.

Returning camper Claire Fezatte, 13, said she felt uplifted by the 2021 CYO camp. Certain pictures will remain in her mind of the experience.

“I like when we’re in the nature pavilion and you can see the lake, the little bridge and all the trees; it’s kind of like a painting, it’s really pretty,” Fezatte said.

“The greatest thing I see here at camp are lives touched by God,” Father Williams said. “I have witnessed this in uncountable ways over 30-plus years and it is ultimately the reason I am so committed to this place.”