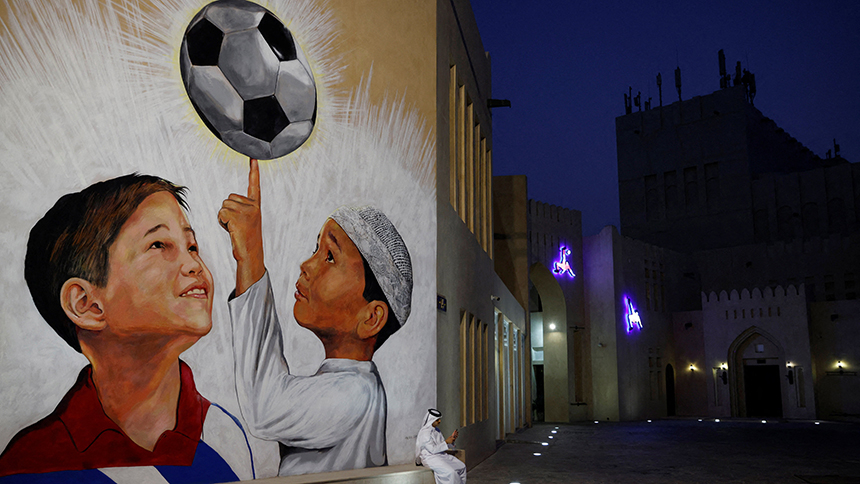 OXFORD, England (CNS) -- European church leaders have urged awareness of human rights issues during the FIFA World Cup in Qatar, amid continued criticism that the Gulf state was allowed to host the tournament.

"Women continue to be held back in Qatar, while non-Islamic religions, including Christianity, are only granted limited freedom, and sexual minorities subjected to criminal prosecution. All of this expresses, not just from a Western viewpoint, a repressive state and social order," said Bishop Stefan Oster of Passau, who heads Germany's Catholic DJK Sportjugend sports association.

He said questions were still asked about the 2010 decision by FIFA, the international soccer governing body, to award the tournament to Qatar, which has no soccer tradition. The bishop issued the statement Nov. 17 as final preparations were made for the 2022 World Cup, Nov. 20-Dec. 18.

"Like other states on the Arabian peninsula, the Emirate of Qatar has been catapulted into a new era thanks to oil and gas wealth -- today, a conservative-traditional Islamic society and economic hypermodern society coexist with each other," Bishop Oster said. "Although it would be unfair to ignore this special situation when criticizing questionable conditions, it would also be inappropriate to keep silent about human rights restrictions."

The bishop said Qatar's mostly foreign population was subject to "strict regulations," while female domestic workers were often isolated and had trouble "upholding their rights against employers."

The situation had worsened, Bishop Oster said, during construction of stadiums and other sites for the World Cup. He said health and safety standards had been "catastrophic," with "countless accidents and far too many deaths" among low-wage laborers.

Meanwhile, Austria's Catholic Diocesan Sports Association also urged concern for Qatar's record for "human rights violations, exploitation of migrant workers, corruption and environmental destruction," and said estimates of up to 3,000 deaths during preparations for the tournament suggested "a lack of transparency and possibly slave-like working conditions."

"Greed always seeks greater profit and superlatives -- we need instead to return to the roots of sport by promoting its capacity to unite," the association said Nov. 13.

"Future global events such as world championships should not be awarded to countries governed in a totalitarian manner, unless they promise legally binding improvements with concrete timetables."

Catholics, mostly from Europe, India and the Philippines, make up one of eight registered Christian denominations in Qatar, whose citizens are subject to Shariah, Islamic law, and are not permitted to display religious symbols or publicize their faith.

Government permission must be obtained for importing Bibles and other Christian literature into the desert country, 88% of whose 2.5 million residents are foreign citizens.

Although at least 60,000 fans are expected at the World Cup's opening match Nov. 20 between Qatar and Ecuador in Doha's Al Bayt Stadium, many bars and restaurants across Europe have vowed not to screen the contest in protest against anti-LGBT laws in the country.

Churches in Germany have recommended religious services and campaign events to raise awareness of rights issues during the monthlong competition and have also urged changes in how World Cup host countries are chosen.

In a Nov. 12 interview with the Italian bishops' SIR news agency, Bishop Paul Hinder, head of the Apostolic Vicariate of Northern Arabia, which includes Qatar, said Doha's large Our Lady of the Rosary Church would remain open for "prayer and meditation" by World Cup fans.

He added that the country had made "enormous strides" toward improved conditions, preventing Catholics from being stoned when they gathered to pray and celebrate the sacraments, but said progress was still needed on "human rights, social rights and labor standards."

"The very decision to entrust the World Cup to Qatar was, as we've read, problematic," Bishop Hinder told SIR. "But I ask arriving fans to respect the local culture, just as Westerners ask those who visit to respect the rules in force in our countries."

In a mid-November report, the Netherlands-based ecumenical Open Doors organization said treatment of Christians had deteriorated during preparations for the World Cup in Qatar. The report said only 61 of Qatar's 157 church buildings had been allowed to reopen after the 2020-2021 coronavirus pandemic, because of a revision of government guidelines.

In his statement, Bishop Oster said he had no wish to make World Cup fans "feel guilty," but added that it was right to look critically at Qatar, which had applied to host the tournament, the world's most watched event, "to underline its international importance and gain in reputation."

He added that "symbolic actions" in Europe to highlight rights abuses should not suggest "moral and cultural superiority," and stressed that many hotel staff, taxi drivers and other service workers in Qatar were "supporting their families at home, often on very small salaries."

"The many dead and injured remain the dark underside of a monumental construction work that must not be forgotten amid the glamor of the completed arenas," the German bishop said.

"Experience teaches that major sporting events do not usually improve the social and political situation of host countries in the long term. For precisely this reason, it remains the task of the international community, even after the World Cup ends in Qatar, to continue supporting reform forces and focusing attention on human rights."