Women reflect on how their mothers influenced their faith 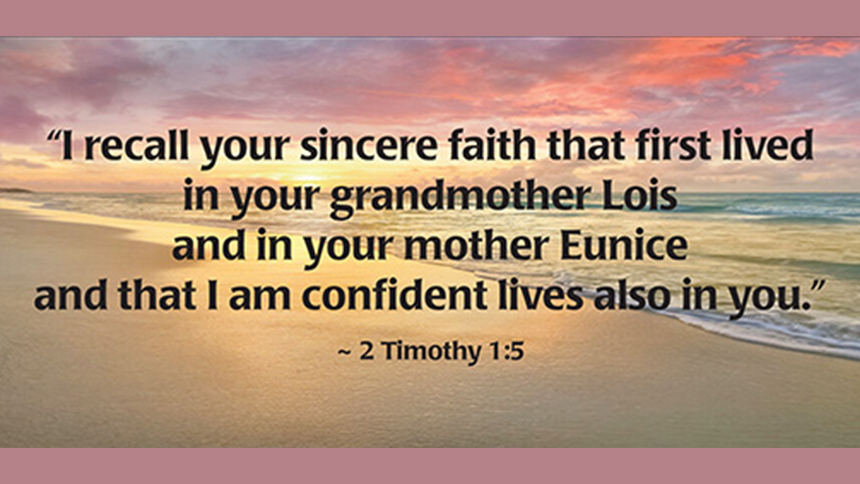 HAMMOND – More than 400 women gathered last month for the NWI Catholic Women’s Conference hosted by the Diocese of Gary, immersing themselves in prayer, enlightenment and inspiration.

While they were in such a spiritual frame of mind, a number of them shared some thoughts in honor of Mother’s Day by answering the question, “How did your mother influence your Catholic faith?”

Theresa Case, of Highland, St. Thomas More, Munster – “She influenced me by example, going to church, praying all the time and saying a family Rosary. I even remember taking a bus to Chicago to attend Mass at a Polish parish, St. Jude. We went to all the Lenten services and the Stations of the Cross. That dedication influenced my devotion to my faith.”

Sheila Hawks, of Chesterton, St. Patrick, Chesterton – “I converted (to Catholicism) 50 years ago after I’d married and had two children. My husband was Catholic, and since we were raising our children Catholic, I wanted to be a good example to them. My mother was Methodist, but she was supportive. She said, ‘I think (your conversion) is a wonderful thing,’ because she felt that the family that goes to church together stays together. She also loved my husband.”

Therese Laciak, of Highland, St. Thomas More, Munster – “My mother’s example influenced my faith. She was very holy and religious, prayed the Rosary at the dinner table and made sure we all went to Mass. She always reminded us that God was in charge. I really appreciate the sacrifices that my parents made to send me to St. John Bosco School, which was very instrumental in developing my faith.”

Elaina Balser, of Valparaiso, St. Elizabeth Ann Seton, Valparaiso – “My mother’s parents came from Italy, and watching her make sure all six of us siblings got dressed and ready for 8 a.m. Mass every Sunday remains a memory for me. Because of her faith, I was able to bring my husband, John, into the Catholic faith in his 40s. We never talked about it, but he (finally) said he wanted to see what made me go to church so faithfully, and that came from my mother’s example. He went to his RCIA meeting himself.”

Sarah Fugger, of Schererville, Carmelite Monastery, Munster – “My mother raised me in the Catholic Church and sent me to St. Thomas More School before I came to Munster High School. I chose to do the right thing, and I learned to ‘Do unto others as you would have them do unto you’ from her.”

Mary Fiene, of Lowell, St. Edward in Lowell – My mother was a convert, and sometimes they are stronger in their faith, because they don’t take it for granted. Her honesty, loyalty, love of people and religious beliefs were intertwined. Her background was Quaker – very strict – then Baptist and Presbyterian. She just soaked up Catholicism from my dad, who was devout, and I think her faith kept her from feeling sorry for herself after he died young. She could have stayed in bed on Sunday mornings after working all week to raise four kids after my dad died, but she always went to Mass. She’d say, ‘What do people do in troubling times if they don’t have God?’ and that inspired me so much. I don’t give up when the going gets tough, I get going – with God’s help. I feel blessed.”

Christine Casiello, of Crete Twp., Ill., Holy Name of Jesus, Cedar Lake – “It has been 18 years today since my mother, Geraldine, passed away, and this is the first time I’ve come out on that day; usually I just stay by myself. At the Mass today, two of the songs were from her funeral Mass, so I think that was a sign, and it was good to hear them. My mother taught me to pray for God’s will, and it took me a long time, but in my 40s I finally accepted that.”

Ruth Banas, of Munster, St. Thomas More, Munster – “I am the fifth of 10 children, and my mother was sweet and nice, but she told us what we could and couldn’t do. She was very strong about going to church and I remember that she sang at Mass. Most of my siblings and I (are active) in the church. My father died young, and my mother made most of our clothes and took care of a lot of people over the years, living her faith.”

Myra Amantea, of Chicago, St. Stanislaus in Chicago – “My mother was always praying and was devoted to the Virgin Mary, and that is what I grew up seeing. It made me curious, and I began exploring why she was so devoted, so I started learning about my faith.”

Mary Huseman, of Lowell, St. Edward – “My mother was a saintly woman who made sacrifices for others, but was so quiet about it. I’d see her in prayer, meditating or reading a book. I’m a nurse, and when children were ill I would ask mom, and she’d come with St. Anne’s oil from Our Lady of Snows Shrine and go into a fasting novena. I have a picture of mom in prayer that captured the essence of who she was. She gave me prayer books and I gave them to my four children when they grew up and told them what she said: ‘You are an adult, and you should pray like an adult.’”

Maria Almendarez, of East Chicago, Holy Trinity Croatian, East Chicago, and Alicia Baez, of Highland, Our Lady of Grace, Highland (sisters) – “Our mom used to tell us, ‘When a door closes, Mary will open a window,’ and we believed it. When we struggled with something, she would tell us to take a deep breath and pray.”