Traditions keep St. John the Baptist community ‘at the top’ for 125 years 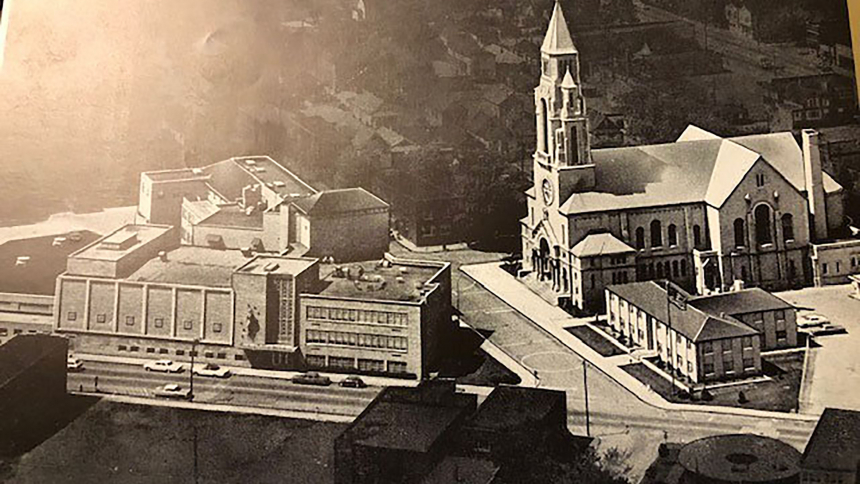 WHITING – The distinctive steeple isn’t the only iconic part of St. John the Baptist parish, but it does stand out, calling Catholics to worship at a church that celebrates 125 years of faithful service this month.

The parish will host an Anniversary Celebration Mass at 4:30 p.m. June 25, followed by a ticketed cook-out and street dance on Lincoln Avenue that will culminate with a surprise event at 9:30 p.m.

“I’m looking forward to the street party, which should bring the community together, and hopefully some former parishioners who’ve moved away will come back,” said Father Mark Peres, C.PP.S., pastor at the Whiting parish since July 1, 2016 and the latest in a string of Missionaries of the Precious Blood priests to lead the congregation for close to 100 years.

Martin Dybel, owner of Baran Funeral Home in the same neighborhood, is a fourth-generation parishioner at SJB. “My great-grandfather was on the committee that brought Father Benedict Rajcany, a recently ordained priest, from Austria-Hungary in 1897 to serve the Slovaks in Whiting,” he said.

Branch No. 130 of the First Catholic Slovak Men’s Union (St. George Society) had been established in 1894 with a dozen members and is credited with founding SBJ parish.

With no church building, Father Rajcany stayed with Father Michael Bryne at his nearby Irish parish, Sacred Heart, where Slovaks had originally worshipped upon their arrival. He later rented a small house and while also ministering to Slovak parishes in Chicago, East Chicago and South Bend until his Whiting parish grew. Fluent in several languages, he also ministered to Hungarians, Croatians and Greeks.

The first SJB church was dedicated on July 4, 1897 after Father Rajcany secured $940 for land and construction costs by ministering to Slovaks in neighboring towns. The first parish house followed in 1999 with room to establish a school that taught 7-8 boys the English language, and by 1900 a separate school building was built along with a home for the new teachers, Sisters of Providence from St. Mary-of-the-Woods, who served the school well into the 1990’s. Enrollment grew to 142 by 1902 and to 685 by 1918.

In 1899, the Senior Holy Rosary Society was founded, and in order to increase dues and provide a death benefit for members, Branch No. 81 of the First Slovak Ladies Union was chartered by the national organization. From 15 charter members the group added a Branch No. 81 Junior Order in 1908.

Another active group has been Branch 81 of the First Catholic Slovak Ladies Association, while the St. John Rosary Society celebrated its 120th anniversary in 2019 as members continue praying the rosary and hosting fundraisers to purchase needed items for the church. A group of 33 women formed the Women’s Altar Society in 1923, growing to 150 by 1927 and later merging with another group to form the Altar and Rosary Society.

Having already purchased five lots facing the original church, Father Rajcany bought four more for $13,700 in 1925, with home visits and a car raffle raising funds to build a new church.

After 30 years as pastor, Father Rajcany’s recommendation that Father John Kostik, a young priest who had been assisting him, be named his successor was ratified by Rt. Rev. John F. Noll, bishop of Fort Wayne, at the end of 1927. He was assisted by priests of the Society of the Precious Blood, and plans got underway to build a new church.

A fire caused $4,500 in damage to the church in 1928, but didn’t interrupt services, and on May 19, 1930, ground was broken for a new church building on the parish’s vacant lots after they were blessed by Father Kostik. A cornerstone was laid during a ceremony on July 6 that included live music, and a procession led by Bishop Noll.

The new church, with its distinctive steeple rising above the Whiting skyline, was dedicated in 1933 and in 1947, the parish celebrated its 50th anniversary with a two-week Lenten Mission, basketball tourney, card party and musical revue. A mural was commissioned for the church’s Grand Arch, elaborately tracing the roots of the Catholic faith. Tracing the roots of the parish was an anniversary book, “Fifty Years of Grace,” chronicling the history of SJB.

Margaret Saliga, who attended St. Joseph School, Bishop Noll Institute and St. Joseph College (now Calumet College of St. Joseph), all in Hammond, came to SJB in 1957, having met her husband George when they shared the stage as the King and Anna in a production of “The King and I.”

“We raised five children here, all of whom attended St. John the Baptist School,” recalled Saliga, one of the most active SJB parishioners. She has served in the choir and as children’s choir director, writes for the parish bulletin, directed the Marriage Prep program, organizes the semi-annual Interdenominational Prayer Services for all Whiting churches, facilitates adult formation series and serves on the Liturgy Committee since 1970.

Her formal title is Faith Enrichment director, and she considers every ministry she serves as being under that umbrella. “I feel the Lord calling me to evangelization, and everything I do has to do with that,” she said.

Her parish is special, she believes, “because of the community interaction, which started when everyone in the neighborhood attended school here and was dedicated to their Catholic faith. We are all in this together, trying to follow what Bishop (Robert) McClory has put in his Pastoral Letter (“We Proclaim Jesus as Lord!”).

“I am most proud of helping people deepen their relationship with the Lord,” Saliga noted. “We can always go deeper, and each level should be different, until we meet the Lord and get to the heart of our faith.”

Dybel, a member of the SJB Centennial Committee 25 years ago who has sung in the choir for 52 years without missing a Christmas Eve Mass and has served as the parish environmentalist for 43 years, said he is most proud of “of our longstanding traditions, including our choir, the Altar and Rosary Society and the Marian Theatre Guild, which began as the St. John Drama Club. We still have our school and many of our traditional activities.

“We still use the Nativity set built 25 years ago by the Marian Theatre Guild on its stage, and our Easter decorations are outstanding – no one has a Resurrection scene like ours,” Dybel added.

His fondest hope is that the parish “continues to grow. We have about 600 families (down from 3,000 at its largest registration).”

Asked about his hopes for the future of the “vibrant faith community,” parish, Father Peres offered this simple wish: “I hope we’ll be here for another 125 years.”