Three men vow to serve the Lord and spread his message

Ordination to the Diaconate
Marlene A. Zloza | Photos By Erin and Anthony 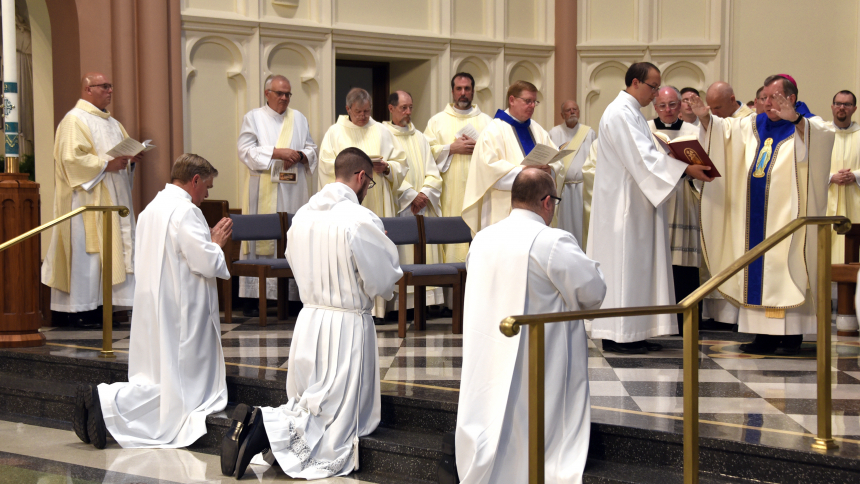 GARY – Three men from the Diocese of Gary vowed to follow in Jesus’ footsteps by devoting their lives to serving others during the Rite of Ordination to the Diaconate on June 4 at the Cathedral of the Holy Angels.

Deacon Robert Ross, 25, was ordained to the transitional diaconate as he prepares for his priestly ordination next summer, while Michael Booth, 39, and Gary Wolfe, 52, were ordained permanent deacons for the diocese.

In his homily, Most Rev. Robert J. McClory noted the appropriateness of the ordination taking place on the vigil of Pentecost, “because soon I will be praying that the Holy Spirit be poured on the three of you, (allowing you to use) what is given us to be of service to others, helping us all grow and be better disciples.

“Your mission is not only to serve at the altar, but in charity and administration,” he added. “One of the hallmarks of our diocese is that we are blessed with so many deacons, and of such high quality.”

Quoting the third of his own Ten Principles of Missionary Discipleship – “We invite others to a personal encounter with Jesus” – Bishop McClory explained that the newly-ordained deacons “are bringing Jesus to others … (in order) that we will see abundant growth through your ministry.”

Deacon Ross summed up his emotions in one word – “readiness” – adding that it has taken “a lot of preparation and a lot of prayer” to get to this point in his journey to the priesthood. “Seven years is a long, long roller coaster ride, but when God calls you to something, it comes down to the people you know, and you add them to your toolbox,” added Deacon Ross.

The new deacon chose his uncle, Father Michael Maginot, to vest him for his ordination “because he was my first priestly influence. His love for and fidelity to the Church inspired me.

“The first time I felt the call to the priesthood came in eighth grade, when I was training altar servers at St. Stephen, Martyr, where he is the pastor. I was playing the parts of the priest and when I lifted my hands at the (sound of the) bells I suddenly felt struck by a sense of peace and joy and immediately connected it to the priesthood.”

That's a different story than Deacon Ross’ mother, Rose Ann Ross told as she celebrated her second son’s diaconate ordination. When he watched his older brother, Father Benjamin Ross, be ordained to the priesthood in 2012, younger brother Bill, now 20, announced that he, too, “can’t wait” to become a priest. “Then I’ll have to get married to pass on the Ross name,” she recalled Robert saying. “I told him, ‘You have to pray and decide for yourself what you want to do,’” she added with a smile.

Thomas Ross said that while he was honored to serve as a lector at the diaconate ordination Mass, “I’m looking forward to next year,” when his second son is scheduled to be ordained to the priesthood. As he continues studying for the priesthood, Deacon Ross will serve this summer at Holy Family Parish in LaPorte.

After huddling to say a prayer with the Missionaries of Charity sisters during the post-ordination reception, Deacon Gary Wolfe was “beyond elated, and filled with the Holy Spirit in a way that I never have been before. I’m excited to see how God will use me to bring the Gospel message to the disenfranchised.”

While serving at St. Michael the Archangel in Schererville, Deacon Wolfe will also continue ministering at St. Anthony Majestic Care Home in Crown Point and hopes to add a hospital ministry to his service.

“Seeing the smile on (her husband’s) face when he was ordained” was the highlight of the ordination for Julie Wolfe. “This is something he’s always talked about and been building toward. He has the gift of words and has always been one to counsel others. He has brought so many people into the Church.”

Julie Wolfe offered evidence that her husband of 25 years is a decisive person who pursued the diaconate steadfastly as part of God’s plan for him. “He proposed after a month and we were married six months after we started dating,” she noted.

Ashley Booth felt “joy that the time has finally come,” after watching her husband, Michael Booth, be ordained a deacon. “When he first told me (about his plans), I wasn’t sure he was old enough, but I knew what being a deacon involved and I did a lot of praying,” she added.

Music brought the couple together, Ashley Booth said. She was living in Monticello when she joined her parish choir along with her mother and sister, while her future husband served as the organist.

“We met and he asked me to join him as a singer when he performed at different places. I agreed, and then he said we should get to know each other since we are going to be performing together, which led to us dating,” she said. The couple has been married almost seven years and has two young daughters who treated the ordination very differently – Izabelle, one year, watched quietly in her mother’s arms and later napped, while Claire, 3, enthusiastically followed her father’s movements to the point of lying on the floor when Deacon Booth lay prostrate before the altar.

“It feels very surreal and humbling,” Deacon Booth said after the ceremony. “I kept reminding myself, ‘I’m a deacon,’ and the moment of truth  finally came after the vesting, when I felt the Holy Spirit say, ‘You are a deacon.’”

Calling his ordination “the end of one chapter and the beginning of another,” Deacon Booth will serve at St. Bridget in Hobart and in the diocesan prison ministry at the Indiana State Prison in Michigan City. “Formation will always be ongoing. This ordination is affirming my call to the order of service, and infusing my ministry with an extra measure of grace.”

Bishop McClory’s blessing at the close of the Mass asked, “for God to bless and give you a great zeal for all (you serve) and help you as you live according to his Word. May you be stewards of his Word.”