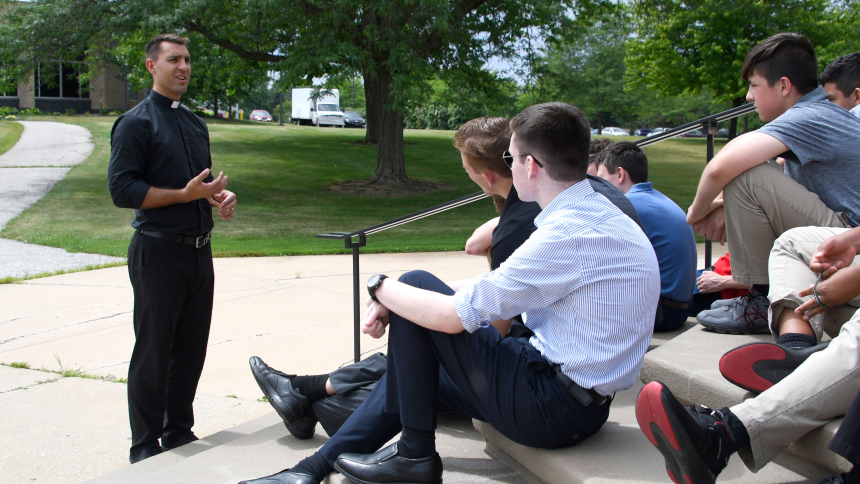 That engagement is hoped to be the start of a journey of discovery for the boys and young men, some of whom are seriously considering a vocation to the priesthood, as “God continues to call laborers for the vineyard.”

“This day of discernment, in particular, focuses on the Kerygma, or the basic story of the good news of the Gospel. It is my hope that if these young men know the story of our salvation, then it will help them to see how their own story is a part of it,” said Diocesan Vocations Director Father Christopher Stanish, who was recently appointed Vicar General and Moderator of the Curia.

The event was designed to provide more than just information about the religious life; the gathering of discerners creates fellowship and sends packing those feelings of weirdness or unworthiness.

Toward the start of a session exploring how God calls his people to serve, Father Stanish read a quote from Pope Emeritus Benedict XVI: “If we let Christ fully into our life, we lose nothing of what makes life free, beautiful and great. Open wide the doors to Christ and you will have a full life.”

In the main hall of the Catholic student center, the discerners heard about and saw visual representations of the “Five Rs” of a call from the Lord: relationship, rebellion, reconciliation, re-creation and response.

“The story begins by recognizing that we were made for relationship with God. He freely chose to bring us into existence and fill us with His life,” said Father Stanish.

He said the intervening variable that causes rebellion is a person’s sinfulness. A chasm forms between us and God and no human effort can repair the breach without divine intervention.

“And so, His total, self-giving love on the cross takes on infinite value, reconciling us with the Father,” Father Stanish explained. “But there’s more. Jesus came to do a lot more than die on the cross for our sins. He wants to make us a new creation.”

A transformation takes place, he said, when we start to think and act like Christ, drawing strength from His Church through the Word and Sacrament. “This is what leads us to a decision point: we must choose to respond to his invitation.”

“Do we believe God can bring about transformation in your life? What do you think about the idea that God wants to share His life with you in the Church?” O’Donnell asked three discerners.

“One thing I like about how God recreates us is that He has all the power in the world, but he never forces someone; he lets it be natural, to live through Him,” said Medina, a freshman at Marian Catholic High School in Chicago Heights, Ill. “He eases into relationships slowly and gives us the time we need to love Him, which is amazing.”

Medina said the day’s events were an “eye opener” on his journey of discernment.

Vocations team members, including Jo Anne Rosenow, administrative assistant, seminarians and discerners joined St. Teresa members for a midday Mass. After the liturgy, they gathered in the newly-renovated sanctuary to reverence a large crucifix purchased for the church in Germany.

Henry Harris, a Valparaiso High School senior and St. Paul parishioner, said he came to the discernment day to find out more. He said being part of a large family of cradle Catholics and converts to the faith has kept him close to the Church.

“One of my great-uncles on my mom’s side is a priest and growing up around (Catholic culture) has helped me enjoy the faith more and have that opportunity to ask questions whenever I have them come up,” said the 17-year-old, who is an extraordinary minister of Holy Communion. “Just being here and being around other guys who share in that calling is very cool.”

Though the religious affiliation of a majority of students at Valparaiso University is Catholic, the school is affiliated with a branch of the Lutheran Church. So, perhaps a group of men walking through campus holding rosaries and saying the devotional prayer could be seen as unusual. But Father Chris led the walk through the adjacent campus as an example of living the faith in a public way.

When the prayers concluded, seminarians gave brief, personal testimonies as to how they’ve stepped on to the road to a priestly vocation. Some featured dramatic turnaround accounts, while others described how living in Catholic environments and loving the liturgy made studying to be a priest a natural fit.

“I‘m committed (to the ministry) now for life,” said Deacon Ross. “I see the next generation of guys thinking about it, and I try to encourage them with things I found helpful.”

Some young men, such as Leo Marcotte, have made the next step on their vocation journey. This fall, the 18-year-old will attend Immaculate Heart of Mary Seminary college in Minnesota.

“I’m in between: I was a discerner and now I’m allowed to attend seminary,” said Marcotte, 18. “I got along with both sides, being an intermediary between discerners and seminarians.”

Father Stanish promised the availability of resources and prayer for discerners before they all dressed down for sporting activities.

“In the Office of Vocations, we have been focusing on discipleship and prayer because if we can help these young men draw close to Jesus, then Jesus will show them what He wants them to do with their lives,” Father Stanish said.

For more information about religious vocations or to support the ministry, visit garyvocations.com or call 219-464-4042.