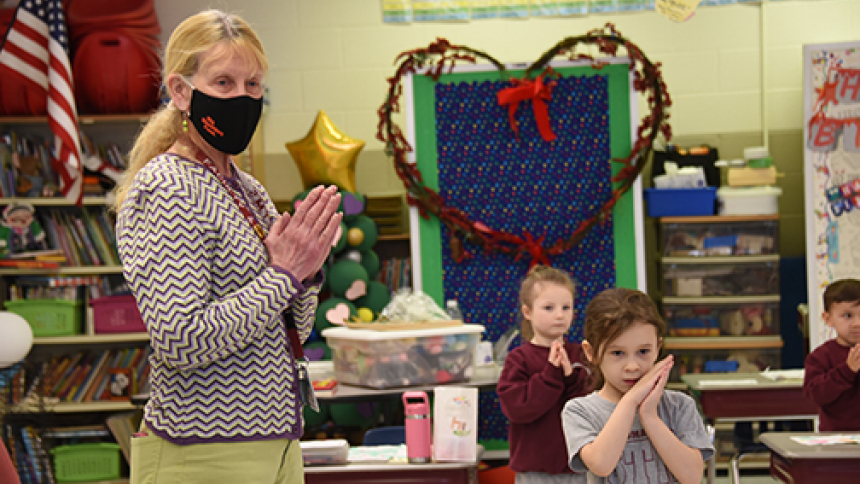 MUNSTER – Back in 1988, when St. Thomas More School constructed an addition to house a new kindergarten, Kathleen Pagorek toured the modern, spacious facility and said, “This is beautiful; someday this could be my classroom.”

The dream of the Chicago Catholic school alumna and Munster mother of four became a reality in 1995, when she began a teaching career at St. Thomas More. The instructional work with some of the school’s youngest students became a dream job and a connection to a “second family.”

“Three years ago, we moved our (pre-kindergarten) from the (nearby) Weis Center to the main school building, so here I am in that room that 35 years ago I wanted to be in,” Pagorek said.

With the support of her husband, Anthony Pagorek, Kathleen ensured her two daughters, Erica and Hilary, and two sons, Anthony and Bryan, received an all-Catholic education – at St. Thomas More and Andrean High School in Merrillville.

“When Tony and I moved here there was no question about what school the kids were going to go to; we went to Catholic school and they're going to St. Thomas More,” Pagorek said.

This reflected the opportunities her parents gave her in their South Side of Chicago neighborhood, where she and her two brothers attended the now-closed St. Bronislava school. Her future husband attended that institution, though she did not know him then.

“Growing up, I had all nuns for teachers and whenever a sister said something you did it; you asked, 'How high can I jump?’” Pagorek explained. “You learned respect and I think that’s something today’s kids all need to have – for themselves and each other.”

As a youth, Pagorek had the opportunity to show a motherly sort of care for her own mom, who had multiple sclerosis.

“Since I was 12, I was the one that would go down to get the laundry or go across the street to get groceries. I helped out all the time,” Pagorek said about living over her dad’s tavern.

After she earned her teaching degree from Chicago State University, Pagorek started an elementary teaching career in the Archdiocese of Chicago Schools, including at her alma mater.

Turning to the subject of 25 smiling little faces, the boys and girls from one of St. Tom’s two pre-kindergarten classes, Pagorek said teaching the youngsters “is a lot of fun.”

A recent day’s lesson had the kids reading short sentences projected on a smart board. The youngsters’ skills were apparent as they read sentences in unison.

Whatever one calls the St. Tom’s students – noting how they were known as the Warriors when she first started teaching and how the school’s mascot was rebranded as an Eagle – Pagorek said her “peepsies” and “poopsies” (a term of affection given to the youngest students by former pastor and Bishop Emeritus of Lansing, Michigan Carl F. Mengeling) are adorable.

Sometimes a lesson is punctuated by random comments about topics such as the adventures of the students’ siblings or pets. Though they tend to say the darndest things, Pagorek knows as a mother she must prepare them for future success.

“Sometimes I have to say, ‘That’s very nice, and we’ll have to talk about it later,’” said the 26-year St. Thomas More veteran.

Pagroek said one of her commitments is to help the pre-kindergarteners, whose developmental stage puts them squarely in the “me, me, me” phase, learn a sense of empathy. Instead of praying for a piece of candy, she said students are encouraged to pray for their parents or those in need.

Pagorek recently moved to Crown Point to be closer to her own children, but has remained active in the ministries of St. Thomas More. A prayer warrior, she joined the Altar and Rosary Society, appreciative of members’ commitment to prayer and motherly instincts.

“They are such a bunch of sweet ladies … they ask, ‘What did you guys do in school today?’” she said of the Altar and Rosary members. “So many of them have made donations of cards and crafts to share with my little ones.”

Before she began her commitment to attending daily Mass, she became an extraordinary minister of Holy Comm. Pagorek said being present at liturgies to assist has deepened her faith.

Pagorek reflected on her decisions for Catholic education. She said she is proud of her children for keeping the faith, and even choosing careers centered around diocesan schools.

Erica (Pagorek) Giegerich has taught kindergarten at St. John the Evangelist since 2007, and Anthony “Tony” Pagorek recently changed careers, having had a multi-faceted teaching and coaching tenure at Andrean.

“My children all have talents that they can share, and I’m proud of them that they’re sharing those talents and enjoying what they are doing,” Kathleen Pagorek said.

“For many years, Kathy has helped our youngest students develop the basic emotional, social, cognitive, and large and small motor skills needed to be successful in kindergarten … she makes hands-on learning fun,” said Bickel. “Through her actions, Kathy teaches her students to think of and help others.”

An active lifestyle and prayer fitness have kept 65-year-old Pagaorek focused “on the now,” not thinking of retirement. She looks forward to more of the daily surprises of teaching four- and five-year-olds and spending time with her grandchildren.

“I pray and hope I’m doing the right thing,” said Pagorek, who earned the 2008 teacher of the year at St. Thomas More. “I’m not perfect and I’ll tell (my students) that everyday. If I make a mistake in class, I’ll stop and say, ‘I’m sorry.’ They know the only perfect person is Jesus.”

Teaching at a school that is growing for several factors, including the broader support of the state’s School Choice Scholarship Program, she hopes the youngsters “continue to have fun with me.”

“(St. Thomas More) is like family, and we’ve been a part of that family for 40 years,” Pagroek said.

Caption:  Twenty-six-year St. Thomas More School teacher Kathleen Pagorek (left) leads her pre-kindergarten students in prayer in Munster on April 19. The Chicago Catholic school alumna and mother of four was recognized by her peers as an example of someone who puts her heart into her work and has been a great influence on her family and students. (Anthony D. Alonzo photo)