Slovak women celebrate their patroness with Mass and luncheon 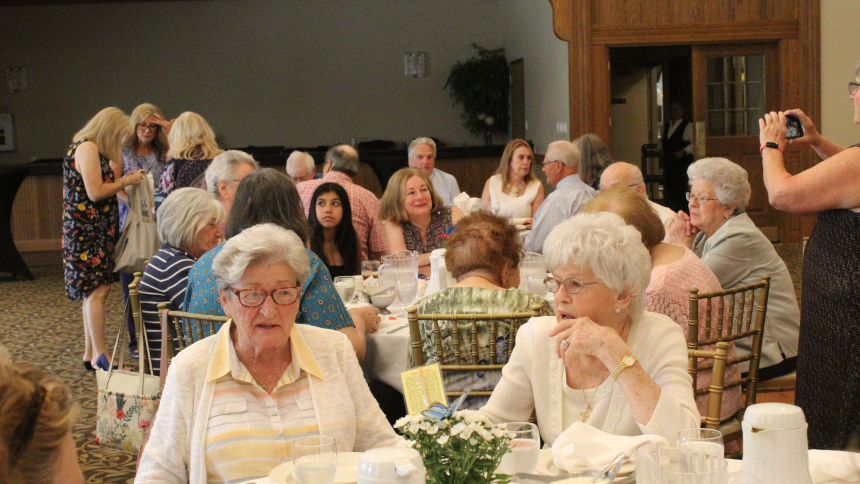 MERRILLVILLE – Little historical information is known about St. Anne and St. Joachim, the parents of Blessed Mary, but recognizing their patroness as a good and faith-filled mother, the First Catholic Slovak Ladies Association marks their annual feast day annually with events throughout the United States honoring St. Anne.

In Northwest Indiana, the Helen Kocan District of the FCSLA celebrated on July 26 with a St. Anne’s Day Mass and Luncheon.

“St. Anne has been the patroness of our association since it was established in 1892 – 130 years ago – to enable women to obtain insurance for their families,” explained Lillian Zaborske, president of the Helen Kocan District. “Their husbands worked in industry, where mortality rates were so high that the women wanted to protect their families. We don’t make a profit; we serve our members and charity.”

In that way, the FCSLA members follow the example of St. Anne in living and protecting her family, including the mother of Jesus. “Every year we get together, with the exception of the past two years during the pandemic, with representatives of the Anna Hurban District of Chicago and the Louise Yash District of Milwaukee, for a Mass and luncheon,” explained Zaborske. “It is purely a celebration, no business takes place, and events like this are held around the country.”

Father Ted Mauch, in his homily, noted that it is “easy to relate” on the feast day of Ss. Anne and Joachim to the parable of the good seed that Jesus explains in the day’s Gospel. “We want to be the kind of wheat that grows up and leads others to nourish and give love,” he said, noting that when Anne and Joachim “began raising their little daughter Mary, they had no idea what the results would be, what the needs (of her life) would be, that she would say ‘Yes’ to the angel and that it would bring about the incarnation, the very salvation of the world.

“Yet they dedicated their lives to loving their daughter (not knowing what lay ahead),” he added, much as the faithful today are called, “even without being able to see what fruits would come. As we celebrate the good works of your association, (just) as you have taken care of your families, taken care of one another and others, we have to take the fruits born of our love and prayer to love more.

“It’s not time to stop giving, but to give more, to produce a continuing spirit of our love,” Father Mauch continued. “Take the example of Joachim and Anne, their clueless self-giving, like the inability to see your gift to your spouse, your children, your grandchildren, your community, (and express that gift) in how you love and serve your neighbors.”

Father Mauch also noted that Slovak people and culture “are special to the Diocese of Gary because of our first bishop, Bishop Andrew G. Grutka,” whose Slovak heritage led him “to take it to heart to support Slovak culture.”

Christians do not know much about Joachim and Anne – even their names have been handed on by tradition. The stories that have come down to the Catholic Church suggest they were likely financially well-off and had been childless for most of their marriage. An angel appeared to them to announce a birth in their old age, and Anne promised to dedicate the child to the service of God. Mary was their only child, and they presented her at the temple when she was just 3, prefiguring the presentation of Jesus.

Though little is known about the holy couple, the Church holds the parents of Mary in great esteem because they were the ones who taught her the faithfulness that she demonstrated in accepting God’s invitation to become the mother of Jesus.

Irene Diehl-Solivais, 93, of Crown Point, a member of FCSLA Branch 289 or Gary, admitted that she knows little about St. Anne, but has been a staunch supporter of the FCSLA for many years and had a beloved aunt named Anne.

Her daughter, Chris Mucha, visiting from California, said she has been studying saints’ lives with her twin children in preparation for their confirmation, and learned that St. Anne is not only the patroness or grandparents, but also of infertile couples and miners.

Ann Bakondi, of Crown Point, a member of FCSLA Branch 81 of Whiting, added that while she knows little of St. Anne, “I’m proud that my mother picked that name for me.”

Luncheon guest Elaine Dainton, of Lowell, said she has purchased insurance for all five of her grandchildren through FCSLA, and “is happy to see what the organization is all about.” She added that she recently attended a FCSLA Scholarship Luncheon where her grandson and first-grader Nicholas Dainton received a scholarship to attend St. Mary Catholic Community School in Crown Point.

At the luncheon, the FCSLA members received both a letter and a video message from Cynthia M. Maleski, national president/CEO of the FCSLA, in the Ohio home office. “Our patroness, St. Anne, is known for her protection of expectant mothers, grandmothers, housewives and coal miners. We venerate, honor and ask her daughter, the Blessed Virgin Mary, to intercede to Jesus Christ, our Lord, for special favors for us, our families and members,” Maleski wrote. “Of all the saints in the calendar of the Church, none except the Blessed Virgin holds so exalted and unique a position as St. Anne, mother of Mary.

“Several years ago, we began the tradition of placing a wreath at the feet of the St. Anne statue on our grounds at the home office. We dedicate this ceremony to all; of our living and deceased members,” Maleski noted, telling the district members, “We are grateful for your leadership, commitment and service.”