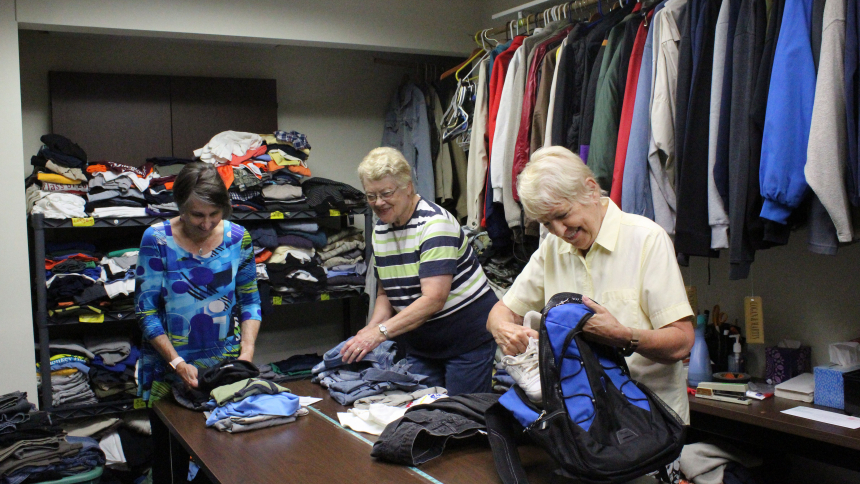 Just as Jesus Christ taught his disciples to care for all people, the Catholic Church embraces a doctrine concerning matters of human dignity and the common good in society known as Catholic Social Teaching.

This doctrine calls for a culture of life where no one is shunned or abandoned, no matter their station in life. Catholics should reach out to all people and meet their needs as much as possible.

One of the Diocese of Gary’s ministries that most strongly embodies Catholic Social Teaching is the Prison and Jail Ministry headed by coordinator Deacon Michael Prendergast, who is largely assisted by a group of fellow deacons and dedicated volunteers who serve at the Indiana State Prison, a high-security facility in Michigan City, the Westville Correctional Center, a minimum-security facility in Westville, the Lake and Porter county jails and the Lake and Porter County juvenile centers.

“Everything was shut down during the COVID-19 pandemic; we were not allowed into any of the facilities at all,” said Deacon Prendergast of a halt to services during most of 2020 and 2021. “We just recently have been allowed to return, but it is still very restricted.

“We have been back at Michigan City since last July, and later last year we were allowed back inside Westville,” Deacon Prendergast explained. “We got access to the Porter County Juvenile Center in June 2021, where Deacon Dennis Guernsey and Deacon Peter Znika serve, but have still not been able to return to the Porter County Jail, or to the Lake County Jail or Lake County Juvenile Center.”

The level of access is also restricted, but Deacon Prendergast said his volunteers make the best of it in an effort to bring God to the inmates. Mass can be celebrated weekly on Sundays at Westville, with Holy Cross priests from the University of Notre Dame and the Legionaries of Christ presiding, while prayer services are offered at the ISP, both in the prison proper and in a lower security facility outside the walls, said Deacon Prendergast.

One of the ministry's most faithful volunteers is Clarence O’Conner, who coordinates the Westville ministry and the visits to the Lake County Jail. “I started this ministry 18 years ago, and I mean it when I say that I’m a better person today because of the men I’ve met (behind bars). God is the judge, and he judges these men (for what they’ve done). I don’t do that.”

“(The late) Deacon Joe Codespoti asked me to join this ministry, and he and Deacon Prendergast have been my mentors. “You have to be honest with the men, and not try to ‘save’ them. After getting to know these people, I don’t ask what they’ve done; I give it to God. They may tell me (what they did), and I’ve talked to men on death row. It’s an honor.”

“We used to be able to walk the hallways talking to the men, and go into their cells, but we are very restricted now,” Deacon Prendergast added of the visitors, mainly deacons. “We are going to try to get back to that. It is important to be with these men and show them that we care for them.”

Another way the Diocese of Gary does that is through the Prison Ministry at St. Elizabeth Ann Seton in Valparaiso, headed since 2003 by parishioner Charlotte Rosta, who also volunteers at Westville and the Porter County Jail. “I started going to the prison in 2000, and in November of 2003, our chapel clerk was being released, so my husband and I went to the Gary Bus Station, where the prison used to drop off the men who were released, to greet him. He arrived in shower shoes – in November – torn clothes and a torn jacket that read ‘DOC’ across the back. I couldn’t believe it,” recalled Rosta.

That month she “made a promise to God that when the men were released from then on, we would meet them with (a set of decent) clothes to help them start a new life.” Rosta and a volunteer group from St. Elizabeth Ann Seton, as well as other donors from parishes from Hammond to St. John to LaPorte, have continued serving men from both ISP and Westville.

“It has been very rewarding,” said Rosta, “and I thank all the parishes who help. I have 1-2 contact people at each parish. They bring us clothing donations and I have a room to store them at our parish. We also receive monetary donations to buy clothes, and we have received two grants from the diocese, including a Mercy Fund grant from the Catholic Foundation for NWI last year.

“Our Lady of Sorrows also provides a room to store off-season clothes, and that is so helpful. Father (Paul) Quanz (pastor), has been very generous.” The prisons are “very grateful,” she added, “and we get wonderful cooperation.”

Bulletin boards at the prisons let the incarcerated men know that clothes are available to them when they are released, and they are invited to send a letter providing their pant, shirt and shoe sizes to St. Elizabeth Ann Seton. Rosta ‘shops’ in her storage room to gather shoes, jeans, T-shirts, collared shirts, socks, underwear and belts, as well as a winter coat, sweatshirt and stocking cap if the season calls for it. “These are men that will likely become laborers and they don’t want or need a suit, but if they do we direct them to Goodwill. They mostly ask for jeans, and we have about 100-150 pairs on hand,” Rosta said.

Deacon Prendergast takes the requested clothing to ISP on his weekly visits, while Tim Kiefer, described by Rosta as “a very faithful volunteer,” makes weekly deliveries to Westville, making sure the clothes arrive on time. “We also write back to verify that we are a legitimate organization and that we will provide what we promise. We help an average of 7-8 men a week.”

Since the men who are released don’t have personal contact with their benefactors, Rosta makes sure through her letters to offer a personal message. “We wish them the best and let them know that we are praying for them,” she said.

O’Connor explained that “before COVID, I used to hold services on Saturdays at Westville, which largely holds men whose sentences are eight years or less, and schedule a deacon or Charlotte to lead reflections, but no sermon. Now, we can only go in from Mondays through Thursdays. We have a priest from ND on Mondays with a deacon, and two deacons on Tuesdays and Thursdays, with Charlotte and a deacon on Wednesdays. There are four units they can visit.

“If they come (to a service) just one time, it settles them, and they see the good it can do,” O’Connor said. “This ministry gets into your heart.”

During the COVID lockdown, added O’Connor, “about 30-40 of the men held their own religious service using the missalettes. They had everything but the Eucharist, and they told us about it when we came back.”