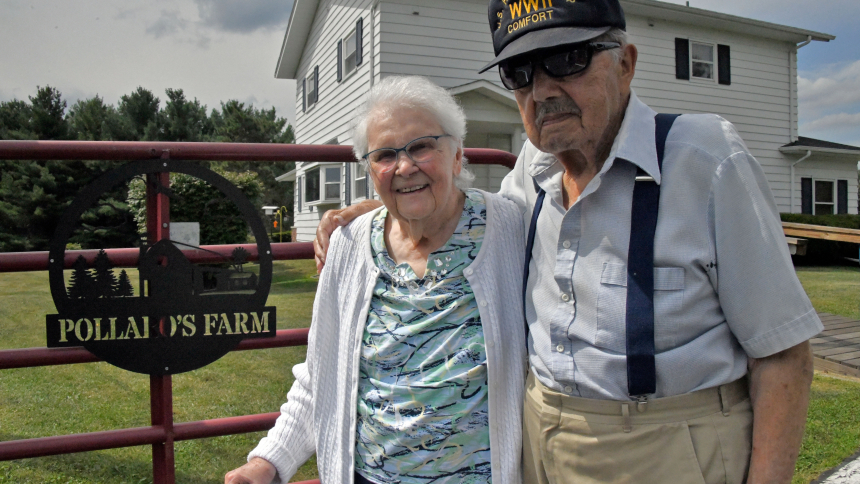 PORTER COUNTY – Joseph and Marylee Pollaro, 95 and 92, have weathered every season of life and continue to celebrate the values of faith and family that they believe have helped them achieve their longevity.

The active, nonagenarian couple had another reason to cheer when the State of Indiana recently awarded the Valparaiso residents with the Homestead Farm Centennial Award. The recognition of maintaining a family farm for more than 100 years is another mile-marker for “Joe,” a World War II veteran and his wife Marylee, a retired nurse.

“Look at those evergreens,” she said, pointing at an aerial picture showing a small line of trees that are now full grown.

The Homestead award included signage and a letter of recognition signed by Governor Eric Holcomb.

The Pollaros’ connection to the Porter County land goes back to when Marylee’s grandfather John Dick started farming on property he acquired. Her parents Lee and Margaret Fleming managed the farm until Lee’s passing in 1963.

Marylee, who has been married to Joe for 71 years, said, at that time, her mother suggested that they may have to sell the farm. Joe and Marylee didn’t want that to happen.

But the Pollaros were focused on their lives as residents of a South Side of Chicago neighborhood near Sherman Park, where their family attended church and school at Visitation Catholic Parish.

“It all comes from their parents teaching the kids, “explained Joe. “You have to have a captain in the house. I was the captain and Marylee was the lieutenant. That’s the way we did it.”

Joe, the son of Italian immigrants, grew up in Chicago, where he had the unique distinction of being both a White Sox and Cubs fan. He was too young to serve when the U.S. entered WWII, but as the years went by, he was determined to serve. When his mother initially refused to sign to allow him to join the army, he threatened to run away.

When they came to terms, Joe was soon on his way for training with the Army’s Medical Department Enlisted Technicians School. He spent much of 1945 aboard the hospital ship the USS Comfort, crewed by the Navy for the Army.

Caring for injured soldiers from the Atlantic and Pacific theaters both at sea and in hospitals stateside, Joe says he “never wants to see men be sent off to war again … though that was 70 years ago.”

A history buff, Joe maintains a collection of WWII maps, medals and commendations, which he displays in his garage and barn.

After the war, Joe rejoined his father, Ralph Pollaro, who was in the produce business. One day, Joe, who worked shining, boxing and moving fruits and vegetables, stepped back on a piece of a wooden box that had a nail facing up.

Joe was taken to Evangelical Hospital in Chicago. His future wife was on duty there working her clinicals with the Evangelical School of Nursing.

“They were busy in the emergency room and called me down,” said Marylee. “I didn’t have a name tag on. I wasn’t going to give (Joe) my name, but then they paged me, ‘Miss Fleming! Miss Fleming!’”

“Later, Joe called me at the nurses residence, and I said, ‘I could go with them if my roommate Adelle Glenn and her boyfriend Bob O’Brien went along,’” recalled Marylee.

The Pollaros were married in 1951, and within the first year after tying the knot, they had their first of five children, Ralph. Joe worked on the Rock Island railroad as a foreman.

When Marylee’s father passed away, the couple was willing to take a chance “saving the farm.” They resettled in her mother’s home, initiating renovations. They enrolled their children in St. Paul School in Valparaiso.

Marylee, who was raised as a Methodist, would inquire more about the faith and eventually join the Catholic Church.

Joe found a manufacturing job at Gary’s Budd company, while Marylee split shifts between being a homemaker and a nurse at a private practice. Though Joe said he “knew nothing about farming,” he and his wife worked with relatives to raise cattle.

In 1964, just as they were setting up their happy home, a tragic event resulted in the loss of their second youngest child, Joseph, Jr., when he was just six years old. The boy was struck down by a car coming over the hill as the family was leaving church near old St. Paul, in central Valparaiso.

“I don’t know how to say it, but you have a lot of grief, but when you have children, you have to go on,” said Marylee, pausing to think of her angelic little boy.

In the coming decades, the family would see their children grow up but not grow apart. Most of their family members live in the Region, except their youngest, Nicholas, who lives with his family in California. They have eight grandchildren and 10 great-grandchildren.

The Pollaros’ daughter Michelle, the second oldest, passed away in 2018. Their third eldest, JoAnn, lives in a house adjacent to the Pollaro farm.

With a little help from their friends, the Pollaros continue to reside on a 35-acre property with their circa 1916 white house and 1919 barn – complete with the family name and American flag painted on the front. Joe said the farm is known by area residents as “the cleanest around.”

He added that visitors are “amazed,” and the organization is apparent to any visitor to the two-story home, barns and outbuildings, where tools and farm equipment are meticulously labeled and displayed.

A mechanically-inclined, kind of guy, Joe drives his near-mint condition 1985 Buick Riviera to Mass and Knights of Columbus functions. He showed his oil change and service dairy before talking about the car’s specs.

The Pollaros, parishioners of St. Elizabeth Ann Seton parish, spoke about the thoughtfulness of Deacon and Mrs. Peter and Ingrid Znika, who they said are regular visitors. Since Marylee is mobile, but walks with a cane, she said she is more secure receiving Holy Communion at home.

Though the Pollaros said, “You don’t know anyone when you get into your 90s,” they continue to stay close to their biological and church family.

“Our best friends for years, the O’Brien’s just passed away,” said Marylee.

“Within three weeks of one another,” Joe added.

“I think the young generation doesn’t have any leadership; the family is going to let them do as they please,” said Joe.

“We both came from good, stable families,” Marylee added.

Ultimately, their faith in the almighty has helped make for a good life.

“First of all, you have to have faith in yourself … and believe in your religion,” Joe said. “I believe in going to church and praying … and God was very good to us, very good.”