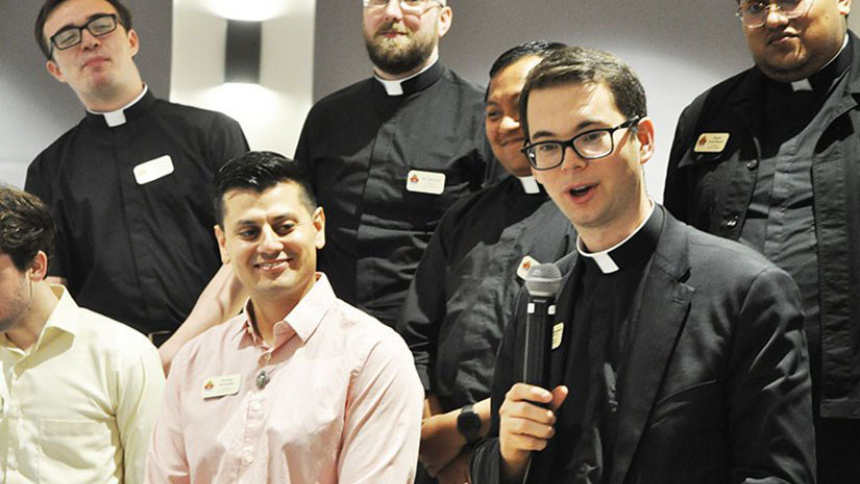 NASHVILLE, Tenn. (CNS) - Each of us has a vocation that God is calling us to. National Vocations Awareness Week, which is Nov. 6-12 this year, is a reminder to listen to God's call.

"National Vocations Awareness Week is one of our many efforts to create a culture of vocations in the diocese such that every person as they grow up is asking what God's will is for their life, what their mission and purpose is, and how they're called to serve others," said Father Luke Wilgenbusch, director of vocations for the Diocese of Nashville.

The weeklong observance was established by the U.S. Conference of Catholic Bishops in 1976 to promote "vocations to the priesthood, diaconate and consecrated life through prayer and education, and to renew our prayers and support for those who are considering one of these particular vocations," according to the website for this year's celebration.

In 1997, the celebration was moved to the feast of the Baptism of the Lord in January. In 2014, the USCCB's Committee on Clergy, Consecrated Life and Vocations moved the observance to November to influence youth and young adults by engaging Catholic schools and colleges, according to the USCCB.

"Each year, the CCLV Committee commissions the Center for Applied Research in the Apostolate to conduct surveys of those recently ordained and religiously professed in the past year. These studies consistently show that vocations are the fruit of communal accompaniment," he said in a Nov. 2 statement.

In Nashville, the diocesan Office of Vocations has several initiatives to promote vocations, including rereleasing its 2019 English-language video "Follow Me," this time in Spanish.

The video is an invitation for young men to consider whether God is calling them to the priesthood. It can be found along with the office's other videos, social media content and website online at nashvocations.org.

"We realized we needed to meet people where they were," said Jerilyn Rost, the assistant director of the diocese's Office of Vocations. "And they were watching videos and they were online. That was the response in 2019, and it still continues to be the response."

In the first year, the "Follow Me" video reached more than 2.5 million people in several countries, she said. "We did not expect that at all."

The office targeted the areas around the seminaries where the diocesan seminarians were studying, and the video was shared by several organizations, including Word on Fire and the Knights of Columbus, as well as other diocesan vocations offices, Rost told the Tennessee Register, Nashville's diocesan newspaper.

In the years since, it has been clear that the men who are applying to be seminarians have watched the "Follow Me" video as well as other videos, such as the animated "Process" video guiding people through the application process, and its YouTube videos of priests and seminarians talking about their lives and their vocations, Rost said.

By translating the "Follow Me" video into Spanish, the Office of Vocations is hoping to broaden its outreach to the growing Hispanic community in the diocese.

Priesthood Sunday, Nov. 6, kicks off Vocations Awareness Week, and Nashville's diocesan vocations office is supporting efforts in the parishes to promote the week and providing seminarian prayer cards for them to distribute.

On the front of the card is artwork of the hearts of the Holy Family: the Sacred Heart of Jesus, the Immaculate Heart of Mary and the Chaste Heart of St. Joseph. On the back of the card are the names of all 21 of the diocese's seminarians and their expected year of ordination.

"We ask all the people of the diocese to pray for our seminarians by name," Rost said.

The goal is for every parishioner to leave Mass the weekend of Priesthood Sunday with a seminarian prayer card, Rost said.

St. Frances Cabrini Church in Lebanon is one of the churches in the diocese that is working to heighten awareness of vocations.

A poster of the diocese's seminarians and other vocations materials will be displayed prominently in the narthex of the church during the weekend of Priesthood Sunday, said Danielle Davis, the parish secretary.

She hopes seeing the seminarian poster displayed so prominently will prompt discussions about vocations among the parish's families. "I want to make that a common conversation in Catholic homes," Davis said. "Talking about being a priest, or any vocation to religious life, is a good thing."

The parish also scheduled its altar server training close to Vocations Awareness Week. St. Frances Cabrini's pastor, Father James Panackal, a Carmelite of Mary Immaculate, has talked about how being an altar server influenced his own vocation journey, Davis noted.

"I think it's important for all youth to be part of altar server training," Davis said. "Not only does it help to bring them closer to the Eucharist but also closer to God."

The Office of Vocations also will be bringing the message of vocations awareness to Catholic schools in the diocese, with all students receiving the seminarian prayer cards and other materials during Vocations Awareness Week.

In addition, the office has purchased an online vocations curriculum from Vianney Vocations for each of the schools to use during the week. It includes resources for a week of age-appropriate lessons for students in kindergarten through 12th grade on the vocations of marriage, priesthood and religious life.

"It makes it easy for teachers to teach on this topic," Father Wilgenbusch said. "It's accessible, it's doable, it's easy to implement because it provides all of the materials, all of the online resources."

It's also "a great overview of vocations because it doesn't just cover the priesthood, but it kind of lays the foundation and then talks about each of the individual vocations as well," he said.

Editor's Note: USCCB resources for dioceses to utilize during National Vocation Awareness Week, including homily aids, recommended reading and discernment tips, prayers of the faithful and bulletin-ready quotes are available at https://bit.ly/3FLWO6S.

Telli is the managing editor of the Tennessee Register, newspaper of the Diocese of Nashville.