Medical supplies donated for victims of war in Ukraine 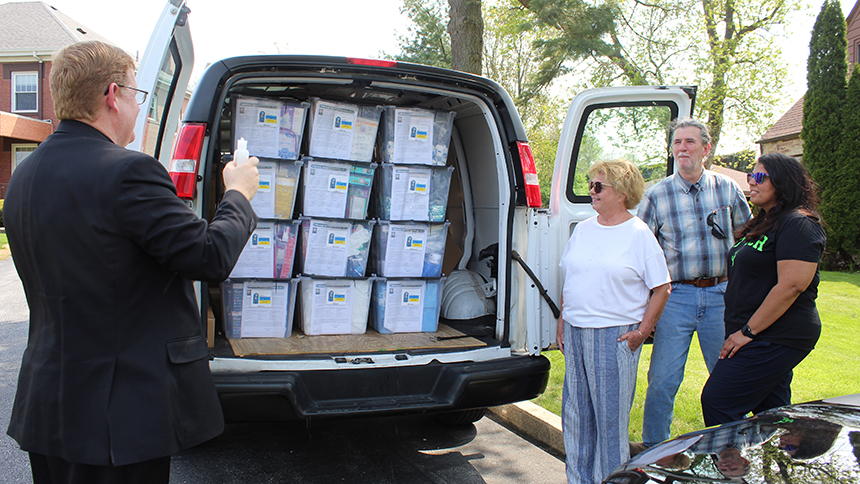 CROWN POINT – Despite the atrocities displayed daily in graphic video clips, it is difficult to imagine the horrors of living in war-torn Ukraine, a country suffering relentless shootings, bombings and rocket attacks. People are hiding in cold, dank basements, waiting in endless lines for a scrap of food, and scrounging for clean water.

It is natural to want to help, and that’s what the parishioners of St. Mary in Crown Point and Our Lady of Consolation in Merrillville did when they teamed up to collect medical supplies for the ravaged country a half world away. A van filled with supplies was brought to St. Mary on May 10, where Father Kevin Huber, pastor, offered a blessing for the people who will benefit from the donation.

“This effort filled 15, 12-gallon totes and 20 other boxes and is part and parcel of our vocation to be disciples and missionaries. This is living the Gospel and sharing the Gospel,” said Father Huber as he sprinkled holy water on the donated supplies and prayed for the people of Ukraine. “We are asking the Lord’s protection and care for those who will receive these items.”

Later, the Ukrainian Medical Association of North America (UMANA) sent a vehicle from its Germantown, Wisc. headquarters to pick up the supplies and add them to other donations being shipped by charter plane to Poland to be transported over the border into Ukraine.

This is the same shipping method used by Franciscan Health to ship donated supplies from its Dyer, Munster, Michigan City, Crown Point and other hospitals after Ukranian obstetrician/gynecologist Dr. Roman Puliaev, who came to the U.S. in 2002, started the effort by contacting UMANA.

“I was inspired when I heard Dr. Myron Lewyckyj, who is my ophthalmologist and is affiliated with Franciscan Health Crown Point, speak on a Chicago evening news broadcast in late February about the plight of the Ukrainian people,” explained Jay Kelley, a retired engineer active at St. Mary and in the Knights of Columbus. Moved by the doctor’s plea, Kelley made contact.

“He told me that medical supplies were needed – large bandages for the types of wounds being inflicted – and gave me contact information for a Ukrainian shipping company,” said Kelley. The shippers provided instructions from the U.S. Consulate Office in Chicago, including the need (to use) clear plastic totes and provide flashlights and blue and yellow duct tape.

Kelley began a quest to collect the necessary containers, medical supplies and even nuclear radiation medication from local ‘big box’ stores and local pharmacies. “Some people suggested just sending money,” but that can be complicated, too, added Kelley. “What was done was to accept that generosity takes many forms, and collecting and sending medical supplies is just one.”

Kelley received 17 large totes from Home Depot in Merrillville, directed the manager of another company that preferred making a monetary donation to Ukraine Crisis Relief Support sources, and hit the motherlode when St. Mary parishioners Kathy Koscielniak and her husband Dr. Joseph Koscielniak filled five totes and several boxes with excess supplies from his orthopedic practice.

“During the pandemic we accumulated supplies because fewer patients needed casts, so I knew I had a lot of medical equipment in excess that we could give to people more in need than we were,” said Koscielniak, whose daughter, Jessica Koscielniak, recently spent three weeks in Ukraine as a USA Today photographer. “For instance, my husband no longer uses plaster casts, but others do, so we had a lot of those supplies. I know the need is great.”

Liz Acevedo, food pantry manager at Catholic Charities – Diocese of Gary, was happy to provide a van to transport the medical supplies from Our Lady of Consolation to St. Mary. “I’ve been watching the news and seeing what has been going on in Ukraine, so when Jay asked, I was happy to do anything to help. These are our brothers and sisters in crisis.”

While the supply drive began in February, Kelley said organizers “were anxious to get these supplies sent, because people are suffering every day.” He is not sure if medical supplies will be collected by the Merrillville/Crown Point supporters again, but noted that those still interested in donating to UMANA efforts can do so at umana.org or call Dr. Mariya Dmytriv-Kapeniak, a physician at Express Care Clinic in Michigan City, at (773) 858-7639 or Olga Maihutiak at (630) 632-9307, for logistical help.

Catholic relief organizations accepting donations for Ukrainian victims and refugees include Catholic Relief Services at cutt.ly/CRS4Ukraine, and the Knights of Columbus Ukraine Solidarity Fund at cutt.ly/KnightsAidUkraine.