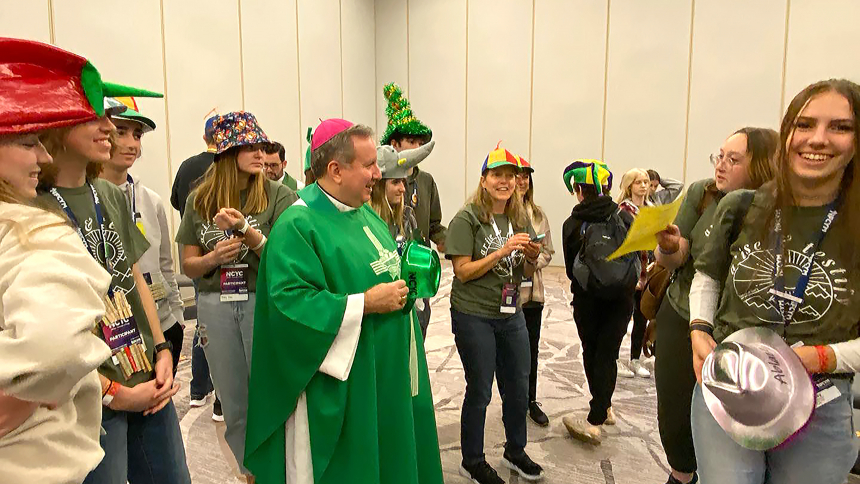 The events ran parallel to the biannual gathering at Lucas Oil Stadium in the state capital. Dozens of youth assembled in the familiar environs of St. John Bosco and Our Lady of Perpetual Help, both in Hammond, St. John the Baptist in Whiting and St. Michael the Archangel in Schererville.

Some teens came to the local NCYC to reprise their experiences in Indianapolis. Others just thought it would be cool to see their “old school” friends.

At St. Michael on Nov. 20, three Catholic grade and junior high school alumni met. Nevermind that the church and parish hall were not the entertainment venue that Indianapolis’s professional football stadium is; the teens felt like they were part of something bigger.

“I mainly like listening to the speakers because if you realize how many people go to the actual NCYC and how many people actually listen to the livestreams, everyone is there for the same reason – because of their relationship with God,” said Parker Knueppel, a 17-year-old junior at Marian Catholic High School of Chicago Heights, Ill.

At the gathering dubbed the “219 Experience,” recalling Northwest Indiana’s area code, 15-year-old Grant Richardson said he was eager to call out to the Lord during the evening’s Eucharistic Adoration.

“I kind of imagine I’m talking to a friend. I envision one of my friends, but I know I’m talking to God,” said Richardson, a Lake Central High School sophomore.

Joe O’Donnell, a 17-year-old Andrean High School junior added: “I feel the same way about adoration – it'll be a really special moment for me.”

Bri Cook, 17, a Lake Central junior, and cousins Caleigh Doffin, 17, an Andrean senior, and Grace Doffin, 15, a Lake Central sophomore had come to the local event with Cook having attended the 2019 NCYC in Indianapolis.

Cook said there was a camaraderie like at the national event, throwing out descriptive words such as "togetherness," “intimate,” “friendliness.”

The adults had also set up games such as LCR (Left Center Right) in which the excitable teens tossed dice and tried not to pass off their candy snacks.

Jeannine Quigley has coordinated the RADIATE high school youth ministry for more than a decade and has participated in national NCYC events. After teaching at the elementary level at the parish school and participating in many ministries, she said she saw the value of coordinating a teen ministry.

“I knew without a doubt – that calling was so strong," Jeannie Quigley said. “At first, you may have fears that you are not funny or know how teenagers think.”

As soon as she said that, RADIATE teen members came by to say “hi.”

“Seeing these young people, you feel hope that there is a future for our Church," Jeannine Quigley added.

A recorded presentation from NCYC by parent and musician Noelle Garcia appeared to captivate not only the crowd in Indianapolis, but also the Schererville group, as the artist spoke of potential loss and being sought after by God.

Even more introspective was the mood of the teens as they prepared to participate in the Sacrament of Reconciliation with one of four priests joining the event – Father Jeffrey Burton, Father Martin Dobrzynski, Father Jacob McDaniel and Father Declan McNicholas.

Then the group went through the darkened church to gather near candles that illuminated the chapel, where they would adore the Eucharistic Lord.

At Our Lady of Perpetual Help on Nov. 19, Father Charles Mosley catechized the youths gathered in the sanctuary about the Real Presence of Jesus. When he walked up to the monstrance placed on the altar, having carried a consecrated host from the tabernacle in the side chapel, the Hammond pastor ushered in 15 minutes of silent prayer.

Youth ministry leaders Jamie Sandona and Alfredo “Pepe” Flores shared their stories of discovering the truth in the breaking of the bread. Flores said even the enemies of the Church know that the Holy Eucharist is something real.

Father Mosley sees much value in the gathering for youths.

“By doing things like this, where we can have freedom to express our faith, that can give (young people) courage to go out and surround themselves with like-minded people and live that faith,” said Father Mosley.

In the Ambry, the youth deposited sealed envelopes where they wrote private prayers. Before leaving for the school building where refreshments and art activities awaited, they lit their votive lamps from a common synod-inspired candle.

Going out into the chilly air, the boys and girls shielded their candles so the flame would last until they were indoors again. Most succeeded, and for those whose candles extinguished, friends relit them.

NCYC’s 2021 theme of “Ablaze” was articulated in Indianapolis when author and national Catholic radio host Sister Miriam James Heidland told the stadium faithful, “That means the Holy Spirit is going to come into your life, transform your life and set you on fire so you can preach Christ to the ends of the world."

Just as the apostles were uncertain and waivered, then were later fortified by the gift of the Holy Spirit, some teens recognized as a blessing in disguise those who repeatedly nudged them to attend the event.

“I was thinking of not going to the (local NCYC) because I didn’t think it was going to be fun,” said 14-year-old Elias Alcantar, a St. John Bosco parishioner and Morton High School freshman. “But when I got here it felt real nice. Everyone was kind.”

The evening’s Eucharistic Adoration provided a chance for him to be heard. “I felt that God was there, and he was listening to what we were saying,” Alcantar explained.