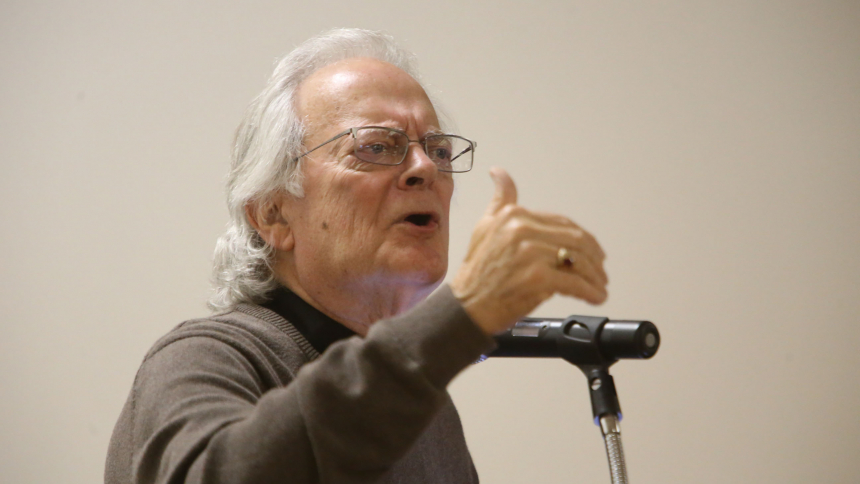 MICHIGAN CITY – When the Queen of All Saints Tapped In committee asked Father Jerry Schweitzer to speak on popes throughout the ages, his thought was, “There are currently, with Pope Francis, 266 popes, take your pick. How do I choose out of those 266?”

The four-talk series, Popes Through the Ages, was held on Wednesdays throughout the month of October. Speakers included Father Bill O’Toole, Father Roque Meraz and Seminarian Nick Emsing.

He explained his focus would be on the pope who served during key ecumenical councils of the Church, namely the Council of Trent and Vatican II.

As a teenager during the days of Vatican II, 1962-1965, Father Schweitzer recalled a “rapid change in my life spiritually because of the Vatican II documents on the Church and Sacred Scripture.”

He noted there were 21 ecumenical councils of the Church with Vatican II being the most recent, preceded by Vatican I (1869-1870) and Council of Trent (1545-1563). “Think of it, three councils since the sixteenth century. That’s a long time. Things don’t change overnight,” he said.

According to Father Schweitzer, Pope Paul III was concerned about what was happening to the Catholic community in Europe in relation to the Reformation taking place in Germany. “The council wasn’t a slam against Martin Luther. It was a redirection of what the Church was doing at this particular time,” said Father Schweitzer.

One of Pope Julius III’s focuses was the real presence of Christ in the Eucharist, a topic that wasn’t talked about much at the time in light of other traditions developing at that time of the Reformation.

“When we think about the Eucharistic meal, the banquet table of the Lord we celebrate during the Sunday Liturgy, it’s not fast food. The councils of the Church never talk about fast food, or an image of it, but rather the reality of the presence of the Risen Christ, here and now, in the Eucharistic meal,” said Father Schweitzer.

He continued, “Sometimes I wonder if our, myself included, presence is real there or is it not? Or is it a matter of driving in, receiving communion, and then driving away and nothing happens? Other than a personal satisfaction that says, yes, I went to church. I fulfilled my obligation. This is not new. It was something that Julius the third was confronting at this time in the sixteenth century because of the reformation and situations that were happening. It’s a good examination of consciousness for each of us.”

Father Schweitzer shared that there is a reformation, of sorts, occurring today. “It’s cultural. Take a look at yourselves, your children, grandchildren. What is their concept of the Eucharist and Sacred Scriptures, the two elements that make up the whole universality of the Church?”

To see who we are now, Father Schweitzer urges the faithful to look into the lives of the popes. “These popes have impacted all of us in our Catholic tradition. Take the opportunity, whether downloading or reading books, to listen to their stories especially on the pope around the councils that existed within the Church. Those councils give us an insight into who we are now,” he said.

Father Schweitzer shared some of the spiritual development during the three hundred years that separated the Council of Trent and Vatican I, but he asked those in attendance to reflect on their spiritual development. “What is the development of our spirituality in the last 50 years and when will be the next big council of the Catholic Church? What will cause us to say, it’s time for us to get together, to think about the direction and where we’ve been, where we are stable and where we are not,” he proposed.

“Sometimes it’s not the hurricanes, but a gentle breeze,” he said