Extraordinary Ministers of Holy Communion strengthen their faith by serving 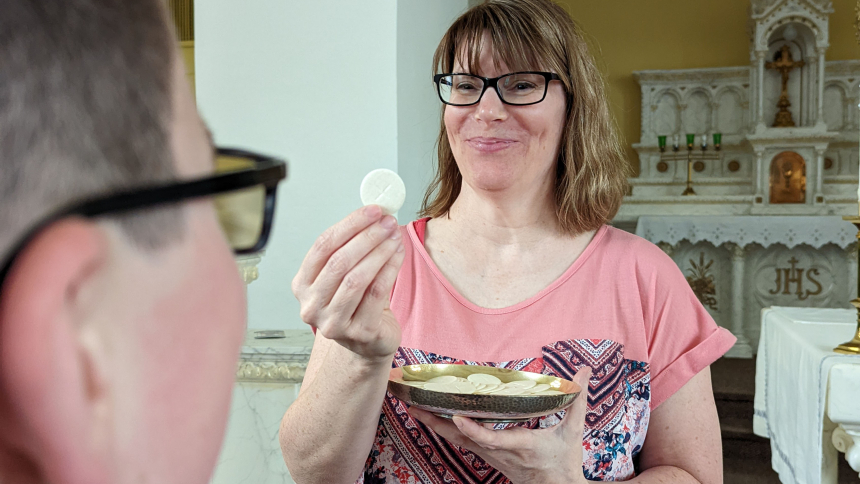 There are many parish ministries that offer Catholics the opportunity to share their gifts with members of their faith community, but none is more central to the Catholic Church than the Extraordinary Ministers of Holy Communion.

During the ongoing National Eucharistic Revival, the role of these ministers has been in the spotlight, and several in the Diocese of Gary – some relatively new to the ministry and others with decades of experience –- provided a glimpse into what their vocation means to them.

Darcy Wood, secretary/bookkeeper at St. Mary in Kouts, responded to a need about 10 years ago. “There was a need in our small parish and our then-pastor, the late Father Thomas Tibbs, was having some health issues, so I volunteered to help out,” she said. “I prayed on it, because I felt I wasn’t worthy, but another minister pointed out that none of us is worthy, and I realized that was true. I started out with the chalice, because I was so scared I’d drop a host.”

Mary Ann Lopez, an EMHC and lector at St. Francis Xavier in Lake Station for 12 years, remembers “that I felt the Lord was calling me to do more, and our pastor was giving classes, so I signed up. It has strengthened my relationship with the Eucharist and given me faith in bad times.

“I lost my husband five years ago and I had a really hard time, so I started going to daily Mass and receiving the Eucharist,” Lopez said. “It took the darkness and pain away, and it gave me comfort to know the Lord was in me and with me all the time.”

At St. Edward in Lowell, Alane Walk has served as an EMHC on and off for more than 10 years, following a suggestion by Deacon Bill Hathaway and Father Ted Nordquist. “I always thought you had to be a saint, but I talked to Deacon Bill about it and then I felt more comfortable,” she said. “I know a lot of people feel that way, but there are so many people out there who could serve. They don’t need to be afraid.”

Kristen Cueller, a Schererville resident who worships at St. Edward, joined the EMHC ministry in 2019 when the parish was struggling to fill a number of roles. “I felt called to get involved, and it’s a great way to celebrate and share the Eucharist with the rest of the congregation. I’ve become a lector, too.”

Maribeth Rupcich, an EMHC for more than 20 years, first at St. Paul in Valparaiso and now at St. Patrick in Chesterton, where she serves as coordinator for the ministry, signed on originally “because I felt like it was the right thing to do, a way to serve and offer a gift that I could give to the parish.”

When the COVID-19 pandemic led to the closing of all Catholic churches for several months in 2020, all members of the EMHC ministry reported feeling the loss.

“COVID-19 had and is still having a tremendous impact on our families, friends, and just everyone,” said Lisa Guzman, coordinator of the EMHC ministry at Our Lady of Sorrows in Valparaiso. “It left a complete void in our spiritual lives and innumerable damage to our personal health and well-being. We, as Catholics, depend on our physical and communal worship.

“We accepted the opportunity of ‘attending’ Mass online and … for that we are grateful. But the essential part of the Mass was not available for us. The online and virtual celebrations, however, gave us hope that someday soon we would be able to partake in the physical Body of Christ,” added Guzman, very active in the homebound Eucharistic ministry.

She has ministered at private homes, St. Mary Medical Center and the Lake Park Residential Home, bonding deeply with the residents. “In ministering to the homebound and infirmed, you will experience the true meaning of the Real Presence of our Lord in the Eucharist. You abound with compassion, love and care and in the process build one another up in faith and love,” she explained.

“I was devastated, I was lost; I couldn’t believe that our churches had closed,” said Lopez. “It was so sad, because the Catholic Church is not the same when you can’t receive Jesus.”

Judy Tonk, an EMHC for 30 years at St. Mary of the Lake in Gary, admitted that when churches first closed she “didn’t feel anything. I knew we needed to go with the COVID-19 protocols. But as it continued, I felt like we were losing contact with other parishioners. We did make calls and got Holy Communion to the homebound.”

Fellow St. Mary of the Lake parishioner Carol Barnes began taking Holy Communion to two homebound women, both in their 90’s, about a year ago, and said they are “happy to see me. I feel so honored to be able to do it, and it means a lot to me to see that they are all right and that they know people care for them.”

Barnes added that she “definitely feel(s) Jesus’ presence in the Eucharist. Especially after communion, I like to just sit quietly. I’ll feel that someone is there with me, and it’s Jesus. When I’m out in the sunshine, I feel like God is hugging me.”

Cueller said she appreciates her role as an EMHC more since the pandemic shutdown was lifted. “I feel honored and blessed. I know some people are still a bit uncomfortable coming back, but I see lots of smiles,” she said. “I hope we can go back to receiving the Precious Blood, too.”

Rupcich said being separated from the Eucharist during the pandemic was difficult, but gave her a greater appreciation for the sacrament. “When the host is raised and you know what is before you, how can you not be in awe?” she said.

Paul Neely began his EMHC ministry about three years ago and took on additional roles at St. Patrick in Chesterton during the pandemic. The son of Deacon Vince Neely from the Diocese of Phoenix, he said he feels “constantly recharged” by the Eucharist. “I pray better and more outside of the church, and I’ve joined the Men of St. Joseph and a book study group.”

He has no doubt that the Body and Blood are The Real Presence of Jesus. “The proof is there all the time; you just need to look for it,” he said.

Wood admitted that she “got all emotional” when she was able to return to Mass and once again  distribute Holy Communion to fellow parishioners. “What people said the most was that they (had) missed receiving Christ’s Body,” she said of the pandemic protocols.

“It has been good to be back in church; I really feel at peace there,” added Walk.

Tonk said she gets “a feeling of satisfaction in being a Catholic when she distributes Holy Communion. When I say, “The Body of Christ,” I feel a real connection to him.” 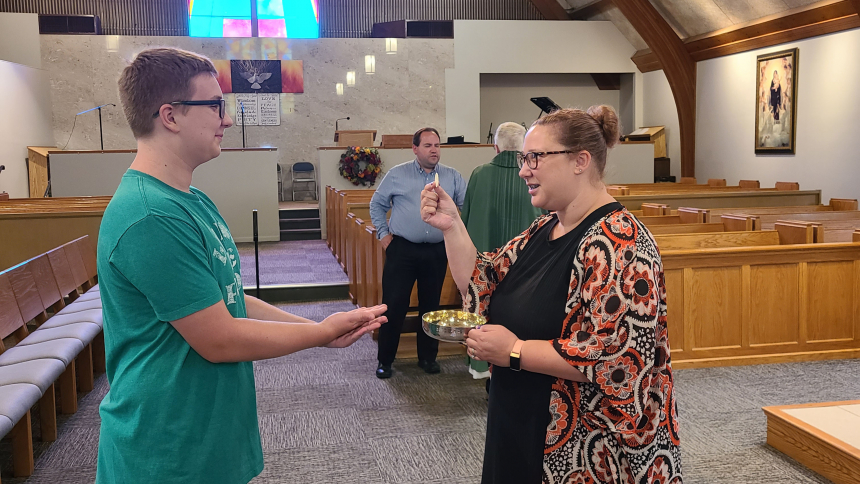