Eucharistic miracles strengthen faith in The Real Presence of Jesus 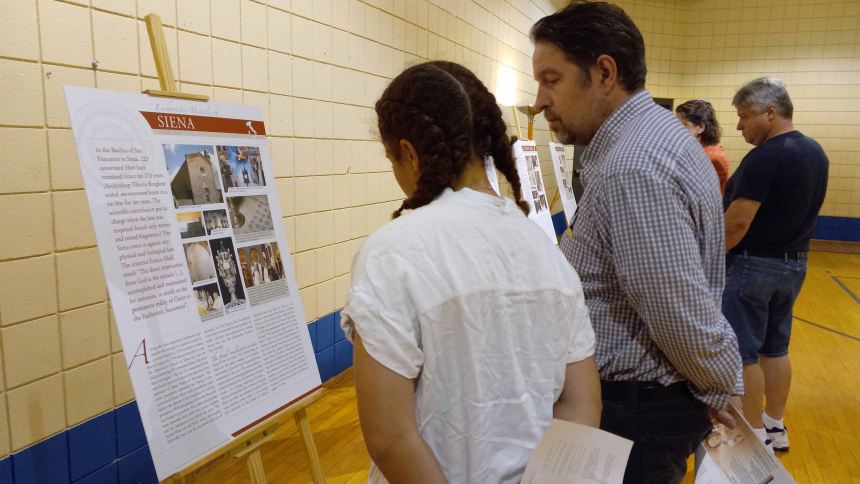 “My life plan is to always be connected to Jesus. The Eucharist is my highway to heaven.” - Blessed Carlos Acutis

HOBART – “Amazing” was the word heard most frequently on June 18-19 as St. Bridget parish hosted an exhibit from the Eucharistic Miracles of the World Exhibition of Carlos Acutis to mark the Feast of Corpus Christi.

A steady stream of people from throughout the Diocese of Gary examined a dozen posters set up in the parish center detailing in words and photos five of the 126 miracles studied and documented by Acutis, the young video gamer and computer programmer who was devoted to the Holy Eucharist and inspired in 2002 to tell the story of Eucharistic miracles through a website he created. With his family’s help, he spent two-and-one-half years on the project, collecting photos, scientific reports and official church records to detail 126 Eucharistic miracles from 22 countries, each venerated at a shrine.

Acutis died suddenly from leukemia in 2006 at the age of 15, and his accomplishment leading from his devotion to the Eucharist became his legacy, spreading across Italy and around the world.

“We specifically chose these five miracles to exhibit because I have actually seen the ones in Italy – Lanciano, Bolsena and Siena – and the other two, from Buenos Aires, Argentina and Tixtla, Mexico are the most recent and have had more scientific research done,” explained Father Ben Ross, pastor at St. Bridget. Having purchased the posters, Father Ross said he plans to set up a permanent display in the church, rotating the five stories.

“We hope this exhibit will increase faith in the true presence of Jesus,” he added.

Seminarian Will O’Donnell, serving at St. Bridget this summer, admitted he didn’t know too much about the Eucharistic miracles until he saw the exhibit. “This is great for confirming the faith of those who don’t believe (in the Eucharist as the true Body and Blood of Christ), and during my prayers this weekend, it calls for me to believe even more.

“It helps me to appreciate what we have (in terms of faith) and enter into the mystery of it,” O’Donnell added. “The real thing (transformation of bread and wine) is still happening, and it takes trust to have faith in it.”

Irene Moore came from Nativity of Our Savior, Portage, to see the exhibit. “It’s amazing, it’s really moving,” she said as she read about the Buenos Aires miracle. In 1992, after Mass, pieces of a consecrated host that was contaminated were placed in a vessel of water to dissolve, and seven days later the segments had taken on a reddish tint. After 10 days, a small drop of blood appeared on a paten, and tests in 1994 and 1996 identified the substance to be consistent with human heart tissue.

“This miracle happened so recently,” noted Moore. “Jesus is trying to tell us something. This is important; I simply just believe (in the real presence), but for others, this (exhibit) could make it more real.”

Parishioners at St. Bridget, the six members of the Sheehan family gathered around each poster after Sunday Mass to share each miraculous story. “I liked the Lanciano (Italy) story the best,” said Caelyn Sheehan. “It looks cool to see (pictures of) the blood up close.”

The miracle of Lanciano occurred during a Mass in 750 A.D., when the host turned into flesh and the wine turned into blood during the consecration. A clinical study in 1970 determined that the flesh - preserved as if taken from a human that same day – is authentic tissue of the myocardium (heart) and the blood is real human blood, type AB (same as that of the Man of the Shroud).

While mom Leah Sheehan admitted, “It’s kind of hard to believe this happened, that’s what a miracle is, right?”

Comparing notes on the Siena, Italy miracle of 1730 were the father-daughter duo of Matt and Arizona Lenski of Holy Martyrs in Merrillville. A total of 223 consecrated hosts were stolen from a church and were later found intact. After 276 years, they remain intact, while a similar number of unconsecrated hosts sealed in a tin box for 10 years revealed only worms and rotted fragments when opened.

“Seeing how many scientific tests they performed makes it pretty surreal,” said Arizona Lenski, whose father had heard about the Eucharistic miracles in college. “It’s nice to come here and see the complete story,” he added.

St. Bridget parishioner Joani Ores commented that “the very intensity of what the researchers observed is amazing. It is also amazing to dedicate your life to this,” she added of Acutis while reading about the Sacred Species from the Miracle at Bolsena, Italy, where a visiting German priest on a pilgrimage in 1263 was saying Mass in the Basilica of Bolsena when the host and wine turned into human flesh and blood, leading Pope Urban to extend the Feast of Corpus Christi to the universal Church.

Karen O’Brien and Kathy Seeley, parishioners at St. Bridget, carefully read the data about each of the five miracles, including the most recent from Tixtla, Mexico, where the effusion of a reddish substance identified as blood was seen in a consecrated host in 2006. Scientific findings labeled the DNA of the substance of human origin, type AB, and originating from the interior of the host. In 2010, the presence of fresh blood was found and the tissue corresponds to myocardium.

“I’m very impressed with the scientific research,” said O’Brien, adding that the exhibit “fits in perfectly” with the Feast of Corpus Christi.

“A friend told me about these miracles about a year ago, and it’s wonderful that the exhibit is here; it’s so much easier to examine it in person. I think it makes people think, and realize what the consecration of the bread and wine is all about, especially younger people who may not have taught about it. Maybe this will help them to understand (what The Real Presence is all about).”

Blessed Carlos Acutis was declared venerable by Pope Francis in 2018 and his beautification was celebrated in Assisi, Italy on Oct. 10, 2020. His heart, a relic, was presented to the U.S Conference of Catholic Bishops to be housed for a year, during the Eucharistic Revival, as a pilgrimage of faith. The next step will be canonization, making him the first millennial saint.