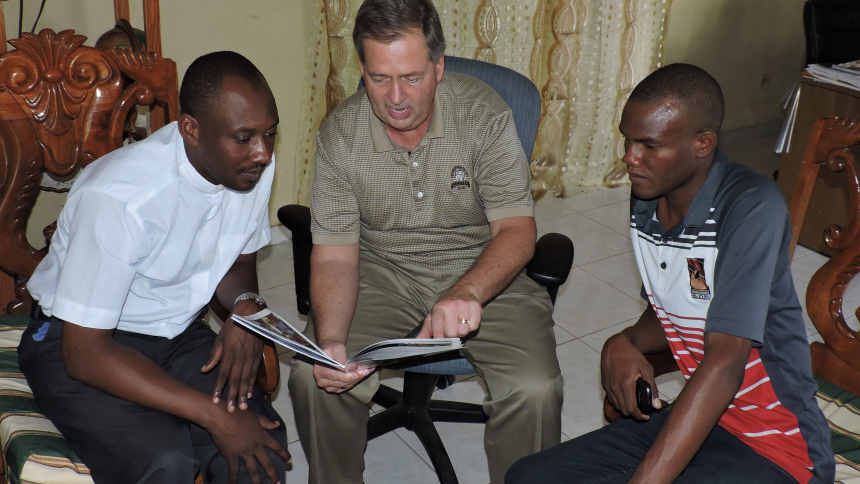 “For our friends in the Diocese of Fort Liberté in Haiti in this time of political unrest, as well as pastoral and economic challenges due to recent natural disasters, we pray to the Lord.”

MERRILLVILLE – When the Caribbean country of Haiti was struck by the one-two punch of an earthquake and Tropical Storm Grace in August, many Catholics in the Diocese of Gary felt the blows acutely as partners in a twinning initiative with the Diocese of Fort Liberté.

Immediately, Bishop Robert J. McClory asked pastors throughout the Gary diocese to host a second collection at late August weekend Masses in response to a suggestion by Archbishop of Los Angeles Jose H. Gomez, the president of the U.S. Conference of Catholic Bishops.

“As you may have heard, the people of Haiti are experiencing political unrest and have been further impacted by a devastating earthquake and tropical storm last week, just one year after another earthquake shook this poor country,” announced pastors from the pulpit concerning the special collection.

As of Sept. 9, the parishes of the Gary diocese had donated well over $40,000, with more deposits expected.

“Whenever there is a second collection, our parish community is very generous,” noted Father Michael Yadron, pastor of St. Thomas More in Munster, whose Haiti collection totaled “about $9,900” the weekend of Aug. 28-29. “They realize that they are in a much better position than most of the world economies. With the past earthquake (a year ago), the very recent earthquake and the governmental turmoil of the assassination of its president, it seems that if Haiti doesn’t have bad luck, it has no luck at all.”

Deacon Dan Lowery, a diocesan leader in the Haiti twinning initiative, has been in email contact with Father Anascar Fonrose of Fort Liberté since the recent devastation, and reports that while the earthquake struck in the southeast region of Haiti, not causing direct damage to the hilly northern region where Fort Liberté is located, “the impact has been indirect. (The recent crises) have devastated the central government, so whatever meager resources there were to address so many needs have been eviscerated.

“Services have shrunken to almost nothing, so Fort Liberté is even more isolated than in the past. There has been a disruption of any commerce that may have been available before.”

Deacon Lowery said the Diocese of Fort Liberté “still has buildings badly in need of rebuilding from previous storms, and the political unrest has brought the political system to a complete standstill now. The COVID-19 virus is also raging in Haiti, and the main international airport is essentially closed down, with no flights coming in from the U.S.

“Fort Liberté has been indirectly, but powerfully, affected,” he added.

While Diocese of Gary financial support to its sister diocese in Haiti is usually directed specifically to educational needs, Deacon Lowery said the August donations will be sent directly to Bishop Quesnel Alphonse “with the only stipulation that he is free to use the funds as most needed. That may even mean sharing the funds with Fort Liberté’s sister dioceses to the south.

“We have a great relationship with, and trust in, Bishop Alphonse, so we are sure he will put our donation to the best possible use for the people of Haiti,” Deacon Lowery added.

A native of Haiti, Deacon Mickey Henry of St. Mary in Crown Point said he spoke a day after the Aug. 14 earthquake with his brother, Paul Rodney Henry, who lives with his wife and three children in LaBoule, outside of the Haitian capital of Port-au-Prince. “They are okay, but are suffering from indirect effects,” he said. “I may have some family closer to where the earthquake hit, but I haven’t heard anything yet.”

Deacon Henry, who came to the U.S. in 1991 at age 17, made the 2017 mission trip to Fort Liberté with Deacon Lowery and then-Bishop Donald J. Hying and saw firsthand the poverty there. “Bishop Alphonse has so many needs, so I’m sure he will tackle areas that really need help” with the Diocese of Gary donations.

“Some kids have no books or food, so they can’t even learn,” Deacon Henry said. “We visited so many places, churches and schools, that need help. I thank the Diocese of Gary for helping Haiti.

“The Haitian people are part of me, and they are hurting,” he added. “I pray for my brothers and sisters there, as well as those in our diocese.”

Deacon Lowery summed up the situation in the Diocese of Fort Liberté succinctly: “It is the poorest diocese in the poorest country in the Western Hemisphere. When the world economy catches cold, Haiti gets pneumonia, and Fort Liberté is put on life support.”