Diocesan Churches Offer Space for Worshippers to Encounter the Lord 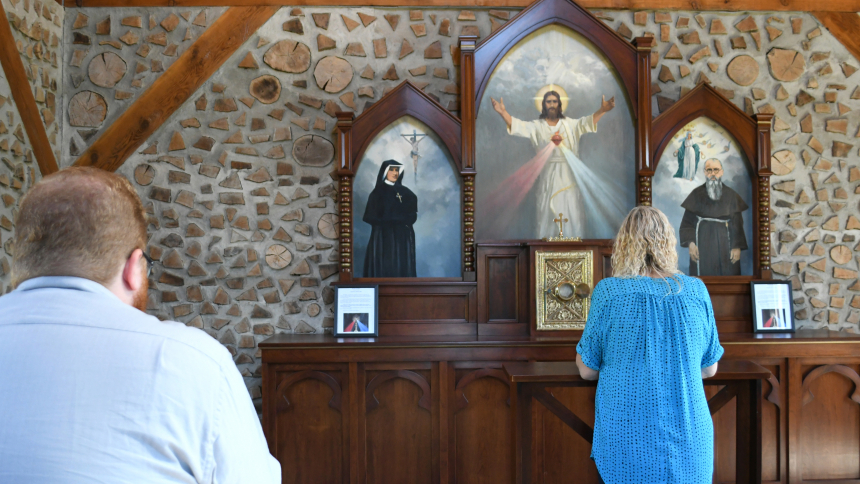 When referring to the Holy Eucharist, which Catholics believe is the Body and Blood of Christ, countless scriptural narratives and saintly reflections have attempted to describe this sacrificial gift of Jesus Christ.

Throughout the centuries, the Catholic Church has made available the species of bread and wine, prayed over they become the Body and Blood of Christ. In the wake of the Protestant break with the Church, the Council of Trent reaffirmed the belief in the Real Presence. Eucharistic miracles have defied science to deepen the faith of millions.

Receiving Holy Communion, St. Thérèse of Lisieux wrote that the sacrament was “a foretaste of heaven.”

In mid-century America, countless scenes played out of businessmen and mothers stopping in churches to pray. The sight of a tabernacle and the familiar red candle indicated the presence of a consecrated host. In recent decades, from the Salvatorian Fathers’ Our Lady of Czestochowa shrine church in Merrillville, to LaPorte’s St. Joseph church, spaces have been developed to help keep area residents close to the Eucharistic Lord.

In those places, a believer worships the second person of the Holy Trinity and, according to local faithful, often feel an “outpouring of peace,” “profound focus” or wonderful feeling where “you can’t leave unhappy.”

St. John Paul II, whose pontificate spanned from 1978 to 2005, said Eucharistic Adoration powered his worldwide ministry. He sought to draw near the Lord, just like the apostle in John 13:25.

“It is pleasant to spend time with him, to lie close to his breast like the beloved disciple and to feel the infinite love present in his heart,” then-Pope John Paul II said. “How often, dear brothers and sisters, have I experienced this, and drawn from it strength, consolation and support.”

A Eucharistic Adoration chapel was established in a house on the St. Joseph parish campus by then-pastor Father Eduardo Malagon. Father Nathaniel Edquist, pastor of Holy Family Parish – the Catholic churches of LaPorte – continues to advocate parishioner participation in the devotional prayer. Father Edquist said in an era when many churches have to be locked for security concerns, chapels provide a personal experience for people without involving much manpower.

“If we want to make the Eucharist the center of our spiritual life, then we have to be able to provide a place for our faithful to go and pray,” said Father Edquist. “Especially today, in a crazy world where there is so much noise, they want a place of silence and calm.”

The site at St. Joseph was recently expanded to include two reading rooms and an inviting entrance area.

“In my own personal experience, part of my vocation story, as a teenager I found the most peace going to the church when adoration was going on,” recalled Father Edquist. “That kind of helped form me as a young man of prayer. Then, I came to the realization that the Lord may be calling me to service in the Church.”

Also sensing the peace of Jesus, parishioner Sherri Evans said her visits to the Our Lady of Guadalupe Divine Mercy Adoration Chapel at St. Patrick parish in Chesterton are out-of-this-world moments of spiritual contentment.

“It’s been the closest place to heaven for me,” said Evans, a regular Eucharistic adorer. “I look at the (Divine Mercy) painting and see Jesus’ open arms to greet you.”

Evans, a Gary native, who spoke of a blessed childhood, “growing up knowing the love of Jesus,” now resides in Chesterton. Over the years, she has developed a regiment of prayer in the chapel: reflecting on the Seven Sorrows of the Blessed Mother, praying litanies, sitting in silence, and staring at the face of Christ in the artwork.

Father Jon Plavcan, pastor of St. Patrick, credited the late Father James Meade, former longtime pastor of the Chesterton church, with identifying the need within the church family and greater community for the construction of the adoration chapel in 2010.

The chapel is a unique core wood design, made of trees felled by a tornado that had ripped through the Duneland area. The sacred site is now climate controlled.

“We do have people coming from different parts of the diocese and other churches that may not be open for prayer,” said Father Plavcan. “They come to the chapel here for their private prayer.”

Emblazoned in Latin on the facade of the Our Lady of Guadalupe Divine Mercy Adoration Chapel is the phrase "Enter the temple of God and worship the Son of the Blessed Virgin Mary.” Originally dedicated to the glory of God as manifested in Our Lady of Guadalupe, another of the chapel’s patrons is St. Maximilian Kolbe.

Father Plavcan pointed out that the chapel was built as a place of prayer in a town that has experienced its share of losses due to the national drug addiction crisis. St. Maximillian Kolbe, a patron of those suffering addictions, is invoked by many who visit and see his painting in the triptych.

A couple years ago, St. Anne of the Dunes parishioner, 68-year-old Joan Baruffi, was cycling on the St. Patrick campus and noticed the chapel. A sign posted on the door announced the hours when the faithful can enter for prayer.

Since her initial visit, the St. Patrick venue has been an “on-my-way-home” place to stop for focused prayer and meditation and gazing at the Blessed Sacrament or Divine Mercy painting from the front kneeler.

“You can talk with the Lord about things for which you are especially grateful that happened during the day … I think about the ways I experienced God through others,” said Baruffi.

Many parishes throughout the Diocese of Gary offer set times when the Blessed Sacrament is exposed, as in a monstrance placed on the altar. Father Terry Bennis, pastor of Ss. Cyril and Methodius in North Judson and All Saints in San Pierre, said he is happy to minister to a small but dedicated group of individuals who come in from town or the countryside to participate in prayerful adoration at the Starke County churches.

Gathered at what is among the oldest surviving religious structures in the diocese, the Maruszczak family was present at St. John the Evangelist’s adoration chapel to fulfill a Holy Hour and the time slot they signed up for with the St. John parish on July 15.

The sacred space located near U.S. Highway 41 and SJE school was recently renovated and is contained in a log cabin structure, which traces its roots to 1844, six years after a German immigrant founded the first church in Lake County.

“Being an adorer gives myself and my family some quiet time to thank the Lord for all the blessings in life and to ask for help in the challenges,” said Doug Maruszczak, a local businessman.

Doug Maruszczak prayed with his wife Jeni Maruszczak and eight-year-old daughter Charlotte Maruszczak before the open-faced tabernacle arranged in the front and center of a well-appointed prayer space. He sees the worship as bringing fulness to his days. “Above and beyond attending (Sunday) Mass, it’s an extra time during the week that we set aside and are able to come in and be in His presence.”