Dedication Rites by Bishop Changes a Table to a Sacred Altar 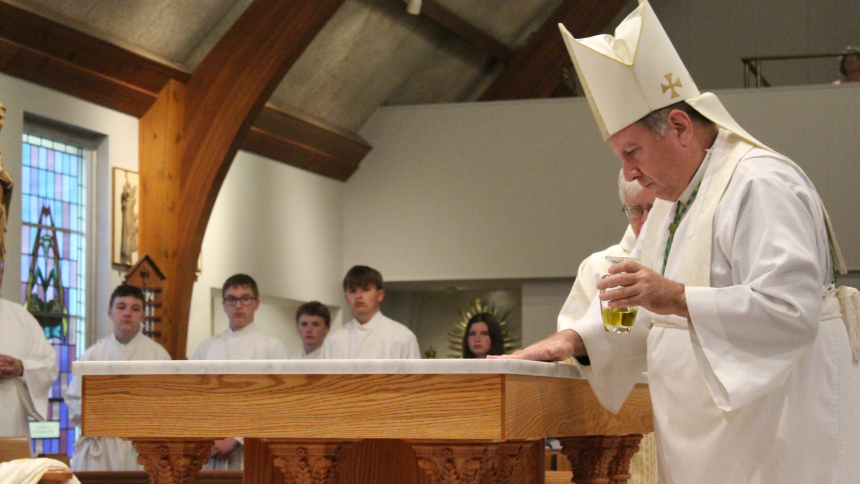 LOWELL – Just a bare table when the Mass began, the Rite of Dedication of an Altar by Bishop Robert J. McClory transformed it into a sacred place of worship during a Mass on Aug. 20 at St. Edward church.

Altars are important to the history of worship, noted the bishop in his homily, from the Old Testament call in the first reading from Isaiah 66: 18-21, which stated in part: “They shall bring all your brothers and sisters from all the nations as an offering to the Lord,” to the image of an obedient Abraham willing to follow God’s directive to sacrifice his son Isaac on an altar.

An offering comes in gratitude, “You bring an offering as a way of saying thanks. In the Old Testament, you would bring the first fruits (of the harvest) to be offered to God,” said Bishop McClory.

That tradition led all the way to “Jesus himself becoming the sacrifice, an offering above all offerings, fulfilling perfectly what all other offerings tried to do,” he added.

In the holy sacrifice at the altar, then, “We participate in the offering of the Body and Blood of our Lord Jesus, and we are able to recognize the Lord not just as a symbol, but in the real Body and Blood,” Bishop McClory noted.

He explained that the prayer of dedication “goes through the litany of all those who have made a sacrifice, made an offering to God” – from Mary, Mother of God, to St. Peter and St. Paul.

The bishop used prayers to dedicate the altar, oil to sanctify it and incense to bless it. As the altar cloth, vessels and instruments of the Mass were added to the altar, candles were lit as he prayed, “May the light of Christ shine upon this altar.”

“This is another beautiful addition (to our church) for us to use to sacrifice to Christ; there are no words to describe it,” said Deacon Roberto Mendoza of St. Edward. “It is perfect timing with the Eucharistic Revival taking place, and hopefully it will draw more people to the liturgy.”

Parishioner Curtis Dainton, who with his wife Elaine Dainton brought up the bouquets of flowers to adorn the new altar during the dedication, called it “A great honor. We were blessed to be able to participate in this dedication.”

“I like the carving of The Last Supper in the center of the altar,” said parishioner George Lutgen, a member of the Knights of Columbus. “I also like the pillars at the corners and the color of the wood.”

Melanie Csepiga, also a parishioner and parish historian, said it was the first time she had witnessed an altar dedication. “It was very impressive. I liked the care that Bishop McClory took in anointing the altar; it was very reverential,” she explained.

“This was a great way to start off the Eucharistic Revival in our church,” added parishioner Glenda Faitak. “It is a testament to Father Rick (Holy) and the emphasis he puts on the Eucharist.”

Father Holy is more than pleased to have a new oak altar – with a marble top to meet the Canon Law requirement for a stone altar – ambo and cathedra (the priest’s chair). “The chair was crafted by a parishioner, Nathan Kleefisch, and he did a great job,” the pastor said.

“I think the church building should inspire people,” he said on the ongoing program to remodel St. Edward’s worship space. “We started by replacing the old plastic window coverings with the stained glass windows repurposed from the former Immaculate Conception church in Whiting, then replaced the (upper) east and west windows, which were just random colored glass, with the sunrise and sunset scenes.

“The altar was the next logical step, but I can’t say I was prescient, since I had no idea that the Eucharistic Revival was coming. I wanted the altar to focus people on the Eucharist as the Real Presence of Christ in the Eucharist, and having The Last Supper (carved) in the front shows that imagery. It is part of our Parish Synod Plan to emphasize the Eucharist.

In the ambo, “There are two ways we emphasize the Lord, in the representation of the Sermon on the Mount and in the Beatitudes,” Father Holy explained.

Donors contributed most of the $20,000 cost for the project, which included the marble altar top. “According to Canon Law, altars must be made of stone, but if you replace a wood altar, as we did, you must at least have a stone top. I told the bishop the weight of a stone altar would probably send it right through the floor, so we added the marble top, as voted on by the parishioners,” Father Holy said.

“I’m very happy that the people got to see the dedication and thankful for the bishop’s visit,” he added. “When you come into the church, it needs to feel like you are in a sacred place, that it is ‘different.’ Let’s make it as nice as we can for our focus on the Eucharist.”

Calling the dedication “a great occasion,” Bishop McClory proclaimed, “This is a beautiful and worthy altar.”