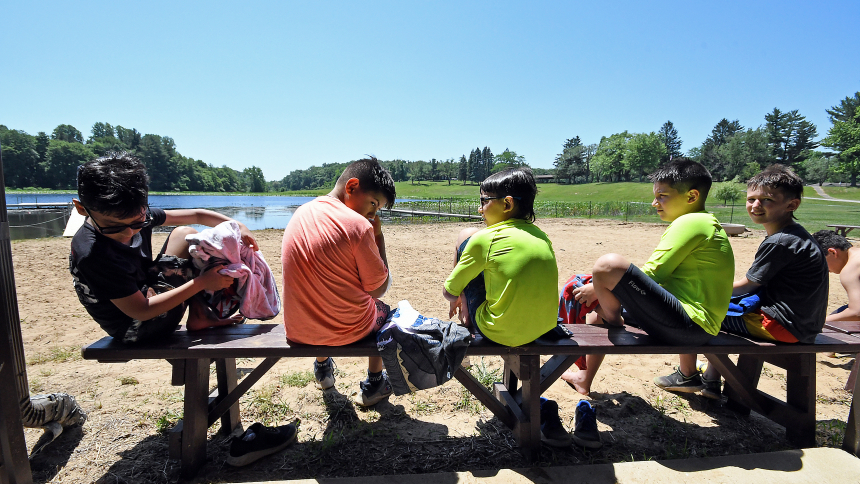 VALPARAISO – A tried-and-true balance of fun, discovery, faith and family have provided a continuity of memorable experiences for campers and counselors alike at the annual Catholic Youth Organization Summer Camps.

Hosted at the Diocese of Gary’s Camp Lawrence in Porter County, the CYO sessions that run from June 19-July 20 feature activities such as nature walks around Moss Lake as well as arts and crafts under a pavilion.

The diocese made significant upgrades to the Camp Lawrence facilities and CYO has introduced more extensive training for its staff. Most recognizable, though, to staffers, campers and alumni alike is a certain sunny attitude that always permeated the activities of the themed weeks at camp.

“Our motto is closer to nature, closer to God,” said Matt Williams, referencing founder Monsignor Lawrence Grothouse, who in 1959 established the campgrounds that play host to the CYO camps. “That’s why we spend most of the day outside, being in God’s environment, which he created for us.”

“I think the kids are more excited to be outside because of being locked inside and being behind screens all the time,” added Williams, a CYO camp director since 2017 and a member of the staff since 2006.

In 2019, the CYO summer camp was canceled after the discovery of infrastructure issues that were rectified over that season. Though the camp had not previously been closed for a summer, 2020 and the pandemic extended that closure into a second season.

Last year CYO resumed its summer camps, with some mask mandates. Since early in its first week, CYO 2022 summer camps have been called “2018 strong” by those familiar with the record attendance.

“There was just such good energy in 2018, we were at the highest capacity we ever reached,” said CYO camp co-director Rosie Scannell. “We have a long waiting list for this season.”

Problems in the economy and labor market have also affected the CYO camps, according to Williams. He said more campers would be admitted, but they haven’t been able to get the desired number of counselors to work, as they feel it is important to keep the counselor-camper ratio low.

During the summer camp session, counselors, counselors-in-training, and even the cook go by whimsical names, and they refer to each other’s proper names only in private conversation. Williams is known as “Snooze.”

Brianna Williams (no relation to Matt Williams) goes by the name of the Sesame Street character Elmo.

“I love the kids so much and I also love the other staff members,” said Brianna Williams. “Obviously, the land is beautiful, and the activities are so fun, but the people are what makes this camp.”

Snooze said, “The counselors and campers end up becoming your one-week family.”

The Time Travel Week theme started on June 19 and the season’s first group of campers experienced prehistoric and classical cultures. They drew dinosaur chalk art and had athletic competitions pitting the Athenians against the Spartans.

As immersed in ancient times as they were during their morning activities, each camper got to return to the comfort of today’s modern conveniences. Buildings such as the cafeteria were climate-controlled, and with the renovations of 2020, all cabins – for counselors and for campers – have been fitted with air conditioning.

This convenience helped make the afternoon break time more comfortable as the mercury pushed into the mid-90s on the first day of camp.

Not fazed by Indiana’s famously varied summer climate, 13-year-old camper Brendan Reilly of Chicago returned for his seventh camp season. The major Chicago White Sox fan gave up following his team for a week as electronics are not permitted among campers.

Just like his allegiances – though his dad is a New York Mets fan – camp runs in the family. His mother was a participant in the CYO summer sessions when she was younger.

Reilly has set a goal for the 2022 season, which is his second-to-last, as the camp serves youth ages 7-14.

He wishes to utilize the privileges he has earned, “Getting older kind of changes stuff … they’re a little more lenient with us,” and make the most of his days.

“I love it here, I have so many memories here; you’re only young once,” Reilly said.

Julia Tatkus, 14, is also among the senior campers. Going into her last week as a camper is bittersweet.

“I was excited, but sad at the same time,” said Tatkus. “I like creating bonds with all the camp girls.”

Though just nine, second-year camper Leo Curley has a sophisticated plan in place to optimize his interactions with his peers.

“This year I have a new counselor and there are new kids here,” Curley said. “Everybody is really nice.”

Curley finds ways to apply his Catholic faith among his new friends. Besides praying with the other campers, he said he learned to deal with personality differences from experiences at last year’s camp; he has a policy of refocusing his attention on more agreeable kids.

According to Scannell – known as “Chimp” to campers – supervisors monitor the youths’ interaction to ensure everyone is being treated fairly.

“We have a week of training to identify homesickness, cliques, all of those things because, at the end of the day, we want our campers to feel the love that camp is and to feel safe and happy,” Scannell explained.

Christian values are woven into how people are expected to treat one another at camp and what kind of activities are set forth.

“Not a lot of people know what we do here that is based on our faith,” said Matt Williams. “Every morning we start with prayer, and we also do that before meals. We have a liturgy every day and Mass twice a week. There are optional prayer services at night.”

Among the younger girls attending the CYO camp, Alexa Reed, 10, also learned about adjusting to new surroundings. Since her debut camp experience last year, she said she has gained a lot of personal confidence.

“Last year I was more nervous because I saw a lot of new people, but some of these people have been here for two years (also),” Reed said. “I know the places (now); before I was so confused.”

Reed even had advice, knowing that some new campers initially deal with some homesickness.

“I would recommend that if you brought a stuffed animal from home, snuggle it and remind yourself of home … you can think that at home it would have probably been more boring than doing all this,” Reed explained.