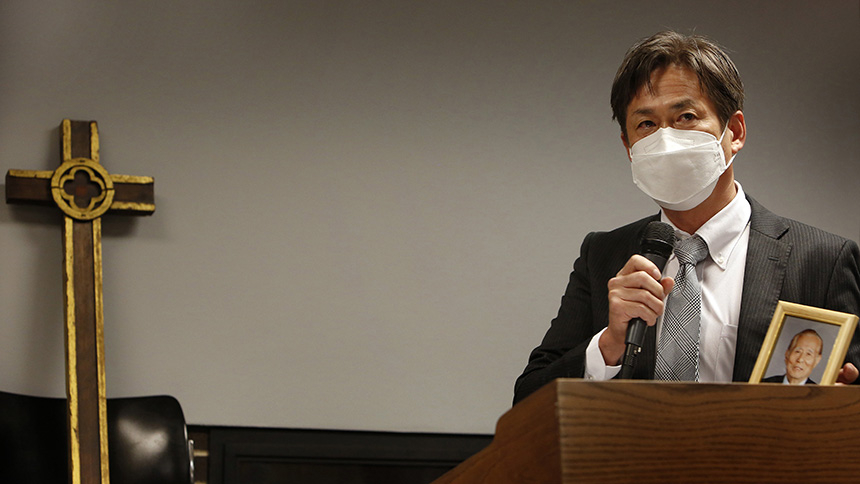 CHICAGO (CNS) - When the United States dropped an atomic bomb on Nagasaki, Japan, Aug. 9, 1945, Archbishop Joseph Mitsuaki Takami's mother was three months pregnant with him. While she survived the bombing, much of her family did not.

His maternal grandmother suffered from horrific burns and bodily trauma for eight days before dying. Two of his maternal aunts died in the bombing. The body of one of his aunts was found; the other was not.

Many of the dead were not found because the heat from the bomb incinerated anything close to the epicenter.

Archbishop Takami, now retired archbishop of Nagasaki, was part of a small peace delegation of atomic bomb survivors that visited the Sheil Catholic Center at Northwestern University Sept. 28 for a Blessed Are the Peacemakers event.

The group participated in Mass with students and guests and shared their stories afterward during a reception and Q&A session.

The six-member group was making a pilgrimage to the United States to present a replica of a cross from the Nagasaki cathedral that survived the bombing to Wilmington College in Ohio.

The original wooden cross was found in the ruins of the old Urakami Cathedral, which was destroyed by the atomic bomb, by Walter Hooke, a Catholic Marine from New York. He received permission from the then-archbishop of Nagasaki to take the cross home.

Hooke later became an activist for peace and donated the cross to Wilmington College's Peace Resource Center, which has the largest collection of materials related to the atomic bombings outside of Japan.

Wilmington College repatriated the cross to Nagasaki in 2019. It is currently displayed in the cathedral alongside the head of a statue of Mary also found in the ruins.

While in the United States, the delegation presented another replica of the cross to Hooke's children in New York.

On Oct. 1, the members met with Chicago Cardinal Blase J. Cupich to share their stories.

Before the event, during an interview with Chicago Catholic, the archdiocesan newspaper, Archbishop Takami and other delegates shared that none of them knew much about what happened to people in the days, weeks and months after the bombings because survivors refused to talk about it. The trauma was just too great.

Father Peter Ritsuo Hisashi, pastor of Urakami Cathedral in Nagasaki, said his mother was 18 and working in a factory when the bomb dropped.

Father Hisachi was 10 when his mother died from cancer, as did many of the bombing survivors. He cannot say for sure her cancer was a result of the bombing, but believes it was.

"But I never asked her about the circumstances in which she found herself at the time of the bombing or how she had felt about the bombing either," he said through an interpreter.

"I now regret the fact that I didn't ask any questions. Many of the atomic bomb survivors remained silent for a long time until very recently," the priest added.

Archbishop Takami, who retired in 2021, and the other delegates said that as they age, they feel a "sense of mission" to speak about the bombings, especially to young people, to promote peace.

Fusako Hirano was 3 years old during the bombing. She now manages a cafe near the Nagasaki Atomic Bomb Museum.

"The first thing I say is, 'No more Hiroshima or Nagasaki,'" she said in English.

She remembers that she was terrified following the bombing, but does not remember much else, she said. But she does remember her elder sister telling her she cried every day for a long time after.

When she married her husband, Katsuichi Hirano, a Catholic, she converted to Catholicism and found some peace through faith.

"Then I know Jesus and I know the Maria," she said. "My heart is so quiet."

Katsuichi Hirano was 2 at the time of the bombing and, like his wife, has no memories of that time. Both his parents survived the bombing, but his father died when he was young.

"He never told me anything about the bombing," Katsuichi Hirano said through an interpreter. "When my father died my mother told me that he didn't want to share his experience with me because he thought once people knew that I was the son of an atomic bomb survivor no one would want to marry me. There was lots of discrimination against atomic bomb survivors," he said.

Katsuichi Hirano first learned details about what happened when he visited the atomic bomb museum in Nagasaki with friends when he was 18.

"When I saw the exhibits at the museum, I was really shocked, and I didn't want to see them again. Even today I will take visitors from outside Nagasaki to the museum, but I will never enter," Katsuichi Hirano said.

Today, he and his wife live close to the epicenter of the bombing.

"I hope to do more for peace and pass on our stories to young people," he said.

Hirokazu Miyazaki, the Kay Davis professor of anthropology at Northwestern University, coordinated the delegation's visit to the United States and has long been affiliated with peace efforts in Nagasaki. He also served as the interpreter for the group.

Research into peace efforts for his work in anthropology led him to work closely with the Catholic Church in Nagasaki. He credits Archbishop Takami with elevating the peace discussions in Japan.

"Before him, the church didn't speak out as concretely about this issue as it does now," he said. "Given his own background as an atomic bomb survivor, he's been really able to speak out about nuclear weapons."

Duriga is editor of Chicago Catholic, newspaper of the Archdiocese of Chicago.