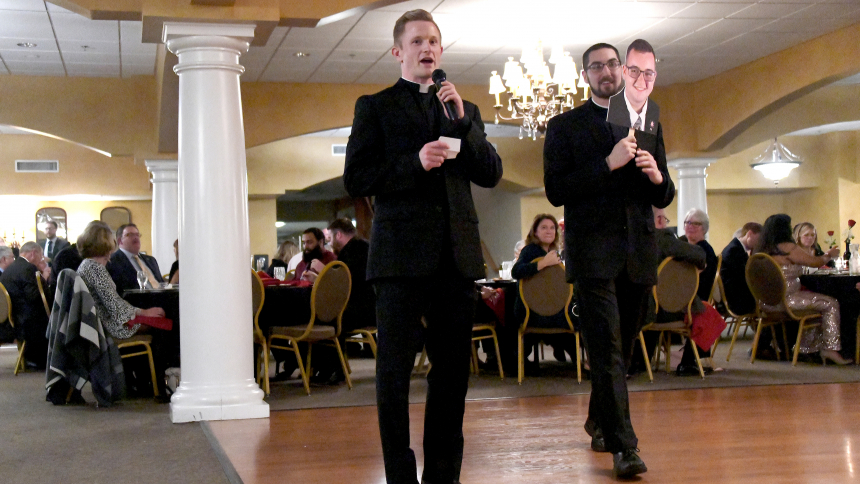 While only one seminarian was present in Trinity Hall at St. Patrick parish – Robert Ross, a student at St. Francis De Sales Seminary of St. Francis, Wisc. – Vocations Director Father Christopher Stanish said the other seminarians are dutifully immersed in their studies at seminaries as far away as Minnesota.

“The seminarians’ primary vocation now is as students,” said Father Stanish, who is chaplain at St. Teresa of Avila Catholic Student Center in Valparaiso. “It’s important for them to be in the seminary and to receive their formation intellectually, spiritually, pastorally, and really (allow) themselves to be molded and formed after the heart of the Good Shepherd.”

Leading the faithful in a prayer before dinner, Bishop Robert J. McClory asked all of those gathered to be responsive to the promptings of the Lord. He prayed that God would “open the ears and hearts of the men and women that you are asking in a special way to come forth to give to you their lives in consecrated service.”

Guests perused silent auction items ranging from religious statuary to homemade decorations. Funds from those auctions as well as event ticket sales go to support those ancillary costs that the young men who are discerning a religious vocation may encounter. The diocese funds their tuition and boarding.

“Being able to be a part of their priestly formation, supporting the formation of our future clergy is the best part of this,” said Bill Harmon, a former seminarian for the Diocese of Fort Wayne-South Bend, who was accompanied by his wife, Jessica Harmon. “As a young couple, we think of a time when we may have children – who is going to baptize them and going to be there to anoint us when we are sick.”

The Harmons, Our Lady of Sorrows, Valparaiso parishioners, joined the faithful in applauding the presence of seminarian Robert Ross, who thanked the Church family for its beneficence.

Grand Knight of the St. Matthias council of the Knights of Columbus Tim Kreke said the men’s fraternal organization decided to adopt Ross as a seminarian since he was assigned to the parish for a time. That translates into an infusion of cash for the seminarian when the group collects funds, a few times a year.

“I can’t wait till Robert (Ross) becomes a priest,” said Kreke. “I got to know him at St. Matthias and I think he is going to make some parish very happy in his future endeavors.”