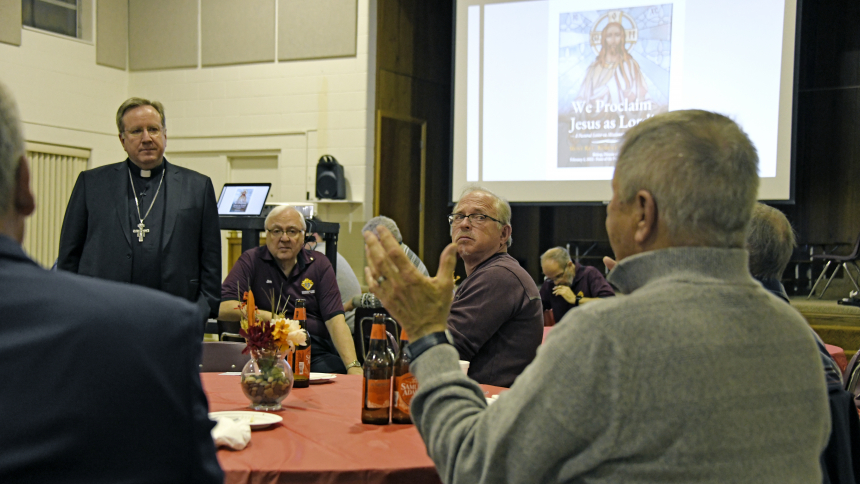 MUNSTER – A meeting of men of the St. Thomas More Holy Name Society that included a Mass, a reflection and dinner was hosted in the spirit of getting back to the basics for a 60-year-old organization dedicated to spiritual enrichment of members and support of other Catholic ministries.

More than 50 men came together on Oct. 13 for Mass at St. Thomas More presided over by Bishop Robert J. McClory in the church, then gathered for the inspirational talk over dinner at the Monsignor Robert B. Weis Center on the parish campus.

The annual reflection event mirrored past gatherings where bishops and other leaders were invited to share their wisdom. Holy Name President Bill Burke, Sr. said prominent guests draw more men, and this was an intentional effort to help boost the group’s numbers that have been lagging since the pandemic starting in 2020.

“The biggest challenge is to get more involvement,” said Burke, who has served as the group’s leader since 2015. “I make personal contacts at church; I try to appeal to brother Knights of Columbus.”

Since its founding in 1961, the Holy Name Society has collected money from dues and Lenten fish frys and raffles. The men’s organization supports Catholic Charities, pro-life causes, the Share Foundation, Camp Lawrence, the Society of St. Vincent de Paul, and parish-affiliated Scouting.

Burke said in this tough economic climate and in these anxiety-provoking times, such support is critical, but prayer is the prime motivator of the Holy Name Society.

“It’s a great way for the men to pray together," Burke explained. “People say they never have the time. We are here together and there’s no better way to start our meetings than with the Rosary.”

At the evening Mass, Bishop McClory’s homily focused on the theme of being “a son of God (rather than) a prisoner of the law.”

At the reflection, Bishop McClory also focused on identities, as he introduced himself and the coat of arms that was designed for his ordination and installation as Bishop of Gary on Feb. 11, 2020.

The Diocese of Gary coat of arms occupies the left side of the bishop’s and includes angel wings, incense, and a background symbolizing the ingots of the local steel industry. Speaking about his personal design, Bishop McClory pointed to the dominant image of the Blessed Sacrament, “I was ordained at Blessed Sacrament Cathedral in Detroit. It also represents Christ.”

Elements chosen to personalize his coat of arms also include a cord with knots and a key to stand for Blessed Solanus Casey, OFM, Cap. “It was at the Salonus Casey Center at St. Bonaventure Monastery in Detroit that my parents met. I have a particular devotion to Blessed Salonus Casey, only the second U.S.-born American male to be beatified,” explained Bishop McClory.

On the right of his coat of arms is a rose that represents St. Thérèse of the Little Flower, a patroness of the McClorys.

The bishop quizzed the group about what the stylized image of a European pinecone to the left of the prominent chalice could signify.

Finally, to make the connection with his presentation in which Bishop McClory would summarize his pastoral letter, “We Proclaim Jesus as Lord!” and the ten principles of missionary discipleship, he pointed to his episcopal motto.

“And then down below is this fancy Latin expression," Bishop McClory said. “Iesum Dominum Praedicamus is really the origin of the pastoral letter that I issued earlier this year. In English, it is 'We proclaim, or we preach, Jesus as Lord.'”

The bishop said this passage, from Second Corinthians, has always been very meaningful to him and “points to the centrality of Christ, and sharing him with others.”

A series of popes from St. Paul VI to Pope Francis have addressed the evangelistic imperative, according to Bishop McClory.

The bishop then quoted Pope Emeritus Benedict XVI: “Being Christian is not the result of an ethical choice or a lofty idea, but the encounter with an event, a person, which gives life a new horizon.”

Bishop McClory said Pope Francis stated that the primary reason for evangelizing is “the love of Jesus which we have received.”

Referring to bookmarks distributed that spell out the ten principles of evangelization, Bishop McClory provided an update for the diocese’s synod implementation.

“Essentially as we were going through a reboot of our synod process – Bishop Hying led a wonderful synod in 2017 – I came and (the pandemic hit) and we were looking for a way to revive that synod.

He continued, “We centered on those two prongs – to be a disciple and to be a missionary.”

In today’s world, reaching out to fallen-away Catholics, those with “confused” understandings of who Jesus is, and those who identify as “nones” – those professing no religious belief – takes on a sense of urgency.

“It’s about the salvation of souls; it’s about a culture that is turning away from God, that doesn’t know Christ. They don’t perceive faith as a gift,” Bishop McClory said.

The bishop praised the “group of faithful men,” and remarked, “I feel so blessed to be here; it’s a great adventure serving the Lord.”

“The more people have brothers and sisters in the Lord that they can be connected to as they live out their faith, it is one way to promote missionary discipleship,” Bishop McClory said.

Longtime Holy Name member Robert Moll, D.D.S., said the bishop’s visit – though he is a Detroit Tigers fan – was a home run.

“Because we’re hearing it from the leader of our diocese, it’s important for us (for him) to be our shepherd. We’re his flock,” said Moll.

Deacon David Kapala has served as a deacon at St. Thomas More since 2011. He retold how his neighbor Joseph Janusonis invited him to come to a Holy Name meeting. That intervention not only helped him to become a more active part of the Catholic family, but also pursue ordination to the diaconate.

“I was one of those guys that was in the pews,” Deacon Kapala said. “I’ve been at St. Tom's for those 37 years, and for the first 20 years, I just sat in the fifth pew right by the choir at Mass. Sometimes you just need somebody to tap on your shoulder and say something to you.”