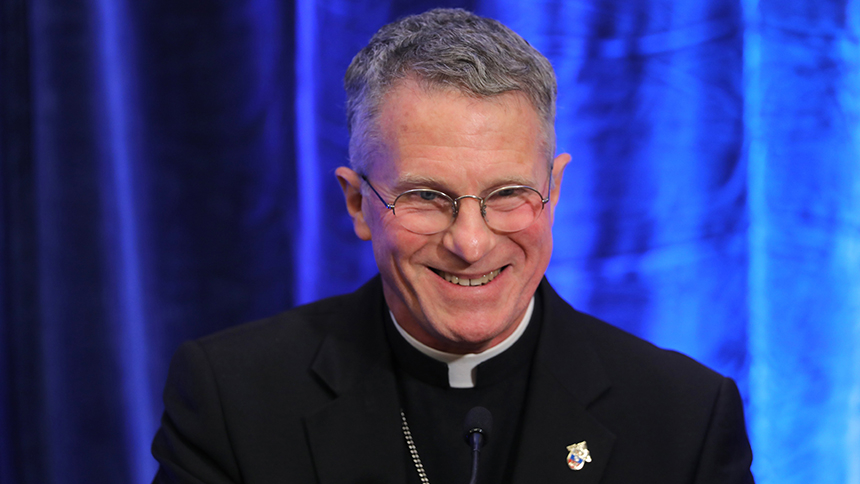 BALTIMORE (CNS) -- Archbishop Timothy P. Broglio of the U.S. Archdiocese for the Military Services was elected Nov. 15 to a three-year term as president of the U.S. Conference of Catholic Bishops during the bishops' fall general assembly in Baltimore.

The native of suburban Cleveland was chosen from a slate of 10 nominees, winning with 138 votes.

In subsequent voting, Archbishop William E. Lori of Baltimore was elected to serve a three-year term as conference vice president. He was elected on the third ballot by 143 to 96 in a runoff with Bishop Kevin C. Rhoades of Fort Wayne-South Bend, Indiana.

Under USCCB bylaws, the vice president is elected from the remaining nine candidates.

The two top officers begin their terms at the conclusion of the fall assembly Nov. 17.

Archbishop Broglio, 70, worked in the Vatican diplomatic corps before being named the head of the military archdiocese in 2007. He has served as conference secretary for the past three years.

Because Archbishop Broglio is conference secretary, the bishops Nov. 16 elected Archbishop Paul S. Coakley of Oklahoma City as his replacement over Cardinal Joseph W. Tobin of Newark, New Jersey, 130 to 104.

Similarly, Archbishop Lori, 71, stepped down as chairman of the bishops' Committee on Pro-Life Activities with his election as USCCB vice president. On Nov. 16, the bishops elected Bishop Michael F. Burbidge of Arlington, Virginia, as the new pro-life chair. He won over Bishop W. Shawn McKnight of Jefferson City, Missouri, 174 to 63.

Archbishop Broglio has served as chairman of the bishops' Committee on International Justice and Peace and their Committee on Canonical Affairs and Church Governance and as a member of the Task Force for the 2013 Special Assembly.

He also served on the committees for Religious Freedom and International Justice and Peace and the subcommittees for the Defense of Marriage and Health Care.

He was ordained a priest in the Diocese of Cleveland in 1977. In the Vatican diplomatic corps, he served as secretary in the apostolic nunciature in Ivory Coast and later in Paraguay. From 1990 to 2001 he was chief of cabinet to Cardinal Angelo Sodano, Vatican secretary of state under St. John Paul II and desk officer for Central America.

In 2001, he was named nuncio to the Dominican Republic and apostolic delegate to Puerto Rico.

Archbishop Lori was appointed the 16th archbishop of Baltimore by Pope Benedict XVI in 2012.

He is the former chairman of the USCCB's Committee on Doctrine and its Ad Hoc Committee for Religious Liberty. He began a three-year term as the bishops' pro-life chairman at the end of the USCCB's 2021 fall assembly.

He also is currently supreme chaplain of the Knights of Columbus.

A native of Louisville, Kentucky, he was ordained to the priesthood for the Archdiocese of Washington in 1977 in St. Matthew Cathedral in Washington. His first assignment was as associate pastor of St. Joseph Parish in Landover, Maryland. Then he served as secretary to Washington Cardinal James A. Hickey as well as chancellor, moderator of the curia and vicar general.

In 1995, Archbishop Lori was ordained as an auxiliary bishop of Washington. In 2001, he was appointed bishop of the Diocese of Bridgeport, Connecticut.

In an interview after the election, Archbishop Lori said he was humbled and honored to be elected by his brother bishops to the national post.

"It certainly causes one to pause and reflect (on) what it means to serve the church across the country in any capacity such as this and it prompts one to pray for the wisdom to do it well and wisely under the leadership of Archbishop Broglio, who will be an excellent leader for our conference," the archbishop said.

Though he had to give up the chairmanship of the pro-life committee to take the vice president's post, Archbishop Lori said, "I think I will still be in a position to be able to assist in our efforts to promote pro-life advocacy and ministry."

In other voting Nov. 15, bishops were elected for three episcopal seats on the board of Catholic Relief Services, the U.S. bishops' overseas relief and development agency.

Archbishop Gregory J. Hartmayer of Atlanta was elected to his first term to the CRS board, while Bishop Mark J. Seitz of El Paso, Texas, and Bishop Anthony B. Taylor of Little Rock, Arkansas, were reelected for a second term.

-- Committee on Canonical Affairs and Church Governance: Bishop Thomas J. Paprocki of Springfield, Illinois, was elected over Bishop Alfred A. Schlert of Allentown, Pennsylvania, 147 to 91.

-- Committee on Evangelization and Catechesis: Archbishop Charles C. Thompson of Indianapolis was elected over Bishop William D. Byrne of Springfield, Massachusetts, 149 to 90.

-- Committee on International Justice and Peace: Bishop Abdallah Elias Zaidan of the Maronite Eparchy of Our Lady of Lebanon was elected over Archbishop Nelson J. Pérez of Philadelphia, 148 to 95.

Each chairman-elect will begin their three-year term as chairmen at the end of the 2023 fall general assembly.

In addition, several chairmen-elect chosen last year will become committee chairmen at the end of this year's assembly and will serve three-year terms:

Contributing to this story was Christopher Gunty.