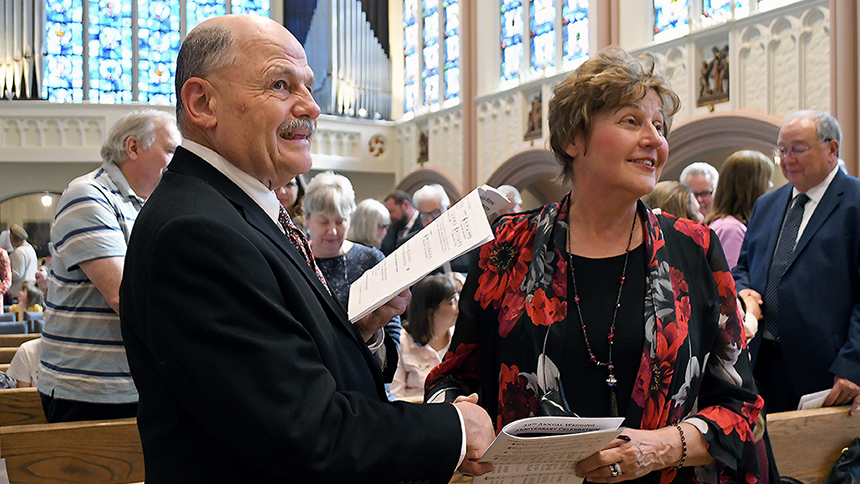 “After this I had a vision of a great multitude, which no one could count, from every nation, race, people and tongue. They stood before the throne and before the Lamb, wearing white robes and holding palm branches in their hands …

GARY – Bishop Robert J. McClory told couples that a successful marriage is like “a window into heaven” as he congratulated them on their inspiring commitment to each other at the 39th annual Wedding Anniversary Mass hosted by the Diocese of Gary on May 7 at the Cathedral of the Holy Angels.

“Sometimes people speculate on what heaven might be like,” he said. “Scripture today gives a glimpse, an image of what heaven will be like,” comparing it to “a wedding feast. How beautiful that today we are given a further insight … which gives an even deeper meaning to our celebration.”

The image of a bridegroom and his bride is often compared “to Christ and his Church and all of us,” added the bishop, and the day’s Second Reading, from Revelation, “tells us what the robes (worn) in heaven will look like, ‘These are the ones who have survived the time of great distress; they have washed their robes and made them white – brides traditionally wear white – in the blood of the Lamb.’”

As a wedding feast offers good food, dancing, the beauty of the celebration of that love and the joy of those beautiful moments, Bishop McClory noted, “That’s what heaven will be like.”

After receiving a blessing from the bishop “to allow God’s grace to come even more deeply to you,” the anniversary couples and their families gathered at a reception where they were personally greeted by Bishop McClory, received a signed certificate and shared a buffet brunch.

John and Lucille Blasko of St. Adalbert in Whiting recalled their own wedding 60 years ago at St. Patrick in Chicago, which included not only an evening reception but “a wedding breakfast, too,” said Lucille.

“God has been in our marriage the whole time,” she added. “All through the years, if we had a problem and a door closed, it seemed like a window opened, and that made it heavenly.”

John Blasko called “the birth of our children, two boys who are both good Catholics and successful,” a heavenly blessing. “We’ve had good times and bad times, but more good times, and she put up with me. It’s been a wonderful life,” he said.

Tom and Lou Roberts, parishioners at St. Patrick in Chesterton, have been married for 60 years, and Lou described “The respect we have for each other, which sometimes leads us to not say what we felt,” as a heavenly trait.

“We met at Franciscan University,” recalled Tom, “and we made a pact when we married that we would never go to bed mad, and always give each other a kiss. Sometimes that was extremely difficult, and we both pouted at times, but (in the morning) she always had a lunch made for me to take to the office, for 54 years,” said the retired financial adviser. “I think respect is a good word.”

Francisco Javier and Blanca Maya were married 50 years ago at St. Luke in Gary after dating for four years and are now parishioners at Nativity of Our Savior in Portage.

“We met at the Spanish Youth Organization in Gary,” said Blanca, who “wouldn’t change a thing,” about their intimate, candlelight wedding on a Friday evening. “My husband had my dress made for me; it was Juliet-style with a long veil, and the reception was at his brother’s home with just about 20 people. That was heavenly.”

Francisco called the birth of the couple’s two daughters and one son a heavenly part of their marriage, and recalls working (as a teacher) on his wedding day. “I have never regretted it,” he said of the past 50 years.

Fred and Judy Rauscher, who will mark 50 years of marriage on Sept. 2, are parishioners at St. Mary in Griffith. They met as teenagers at a CYO Conference at Camp Lawrence in Valparaiso, and when he first saw her, Fred pointed her out to a friend and vowed to get her phone number and take her out on a date.

“I had to wait while I raised the money to fix my car, which wouldn’t have made it from Hobart to Munster, but I did it and then I hit the road,” said Fred, who recalled that at their wedding his father wrote “Help Me” on the soles of the groom’s slippery new shoes. “Carrying Judy out of the reception I slipped and fell, which could have turned bloody if the small bottle of plum wine someone slipped into my pocket had broken.”

What Fred considers heavenly about his marriage brought him to tears. “I have a dedicated wife and about the best mother you could have for your children (Angela and Fred). She’s always there for everyone, very positive and always in high spirits. A stranger likes her right away,” he said.

Judy Rauscher returned the compliment. “He does a lot of little things, like filling the car with gas, and he does more cooking than I do now,” she said of her attentive husband. “Whenever you ask him to do something, he does it.”

Angela Lukas, who snapped photos of her parents, said she admires, “how they support each other. They each have different roles, and it’s like a partnership, and that’s what I want for my marriage.”

Bob and Sue Castagna, of St. John the Evangelist in St. John, met as graduate students at Ohio State University and married 50 years ago.

“We have shared our faith and our careers, and that extends to our son and daughter and five grandchildren,” said Sue. “Bob was the director of the Catholic Conference of Oregon for 21 years and then the director of the Catholic Conference in Kentucky, and I’ve been a Catholic teacher, counselor and administrator at the elementary, high school and college level. We have a wonderful commitment to each other and to our faith, and we try to live it out.”

Bob Castagna paid tribute to his wife. “Sue is God’s gift to me, so I have to try to live up to that. I was walking to Mass when I first saw her walking at a 90-degree angle to me. I waved instinctively, she waved, and when the light turned red, I was hit with a bolt that told me to turn back and start a conversation. Then I went on to Mass and prayed, ‘Lord, let her be the one.’”

Ten days and three dates in a row later, Bob invited Sue to a football weekend at Fordham in New York, his alma mater, and the deal was sealed at a family birthday party when Sue started conversing in Italian with Bob’s grandfather. “The room went silent, and 10 months to the day we met, we got married,” he said. “There are three words important to a marriage – love, laughter and forgiveness.”